What We Have Done: An Oral History of the Disability Rights Movement (Paperback) 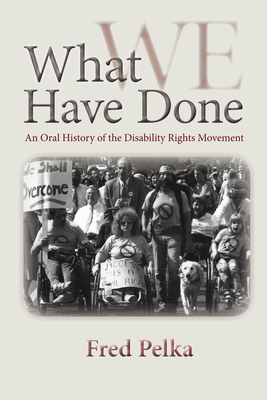 Nothing about us without us has been a core principle of American disability rights activists for more than half a century. It represents a response by people with disabilities to being treated with scorn and abuse or as objects of pity, and to having the most fundamental decisions relating to their lives—where they would live; if and how they would be educated; if they would be allowed to marry or have families; indeed, if they would be permitted to live at all—made by those who were, in the parlance of the movement, "temporarily able-bodied."

In What We Have Done: An Oral History of the Disability Rights Movement, Fred Pelka takes that slogan at face value. He presents the voices of disability rights activists who, in the period from 1950 to 1990, transformed how society views people with disabilities, and recounts how the various streams of the movement came together to push through the Americans with Disabilities Act of 1990, the most sweeping civil rights legislation since passage of the Civil Rights Act of 1964. Beginning with the stories of those who grew up with disabilities in the 1940s and '50s, the book traces how disability came to be seen as a political issue, and how people with disabilities—often isolated, institutionalized, and marginalized—forged a movement analogous to the civil rights, women's rights, and gay rights movements, and fought for full and equal participation in American society.

Fred Pelka is author of The ABC-CLIO Companion to the Disability Rights Movement (1997) and The Civil War Letters of Charles F. Johnson, Invalid Corps (University of Massachusetts Press, 2004). He was a 2004 Guggenheim fellow.

"This book makes a unique and important contribution to the field of disability movement history. Featuring the words of both activist foot soldiers and movement leaders, What We Have Done documents how people with diverse disabilities fought against prejudice and discrimination and won landmark political and legal victories equivalent to those of the African American and other civil rights movements of twentieth-century America."—Mary Lou Breslin, cofounder of the Disability Rights Education and Defense Fund (DREDF)

"Oral history is our most ancient way to talk about the events of the past. No one has worked longer or harder to make the oral history of the disability rights movement come to life than Fred Pelka. With the skill of an excellent interviewer and storyteller Pelka brings the interweaving stories of disability rights activists into the spotlight and elevates their almost overlooked struggle to its just place as a great civil rights movement."—Eric Neudel, founder of Storyline Motion Pictures and director of Lives Worth Living

"People interested in the rights of other oppressed groups--women, gays, and African Americans--will be fascinated by the stories in which disability rights and the rights of other marginalized peoples converge. Readers with disabilities will discover that they, too, have a rich and storied legacy. In sum, so many need this account that no library or bookseller can afford to be without it."—ForeWord

"A unique and comprehensive look at the people and events surrounding the Americans with Disabilities Act of 1990. . . . Everyday people are profiled and given a voice. Most academic and large public libraries will want to consider purchasing this welcome addition to the works on disability matters."—Booklist

"The book truly is a story of disability rights as told by those involved in the movement. . . . This book is of interest to anyone who studies social movements, collective action, and activism, as well as those interested more specifically in disability rights. The accounts provided in the book shed important light on emotions, perceptions, and motivations behind action."—Mobilizing Ideas

"Today, most people don't think twice about the accommodations that give people with disabilities greater access to the public sphere. . . . But 50 and 60 years ago--or even more recently--that was hardly the case. . . . It's an epic story that Northampton writer and researcher Fred Pelka has chronicled in his new book What We Have Done: An Oral History of the Disability Rights Movement."—The Amherst Bulletin

"Because so many people are telling the story in their own words, the narrative has a vivid and poignant feel about it. The book is easy to read and well footnoted, and it contains an extensive, useful index. Recommended."—Choice

"The primary contribution of What We Have Done is as a terrific compilation of narratives that detail the complexity of the disability rights movement from many perspectives."—H-Net Reviews

"Through these voices, the reader is able to understand the frustration of disability rights advocates who endured institutional abuse and patronization, as well as their determination and pride in their accomplishment. As the title suggests, they are able to look back with some satisfaction on 'what we have done,' while making it clear there is more yet to do."—Oral History Review