Water for Elephants: A Novel (Paperback) 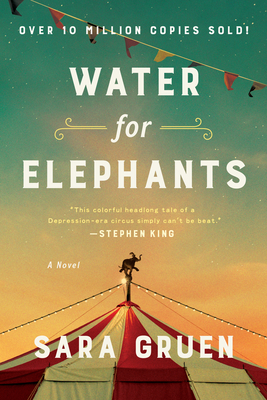 Jacob Janowski’s luck had run out--orphaned and penniless, he had no direction until he landed on a rickety train that was home to the Benzini Brothers Most Spectacular Show on Earth. A veterinary student just shy of a degree, he was put in charge of caring for the circus menagerie. It was the Great Depression and for Jacob the circus was both his salvation and a living hell. There he met Marlena, the beautiful equestrian star married to August, the charismatic but brutal animal trainer. And he met Rosie, an untrainable elephant who was the great hope for this third-rate traveling show. The bond that grew among this group of misfits was one of love and trust, and ultimately, it was their only hope for survival.

Sara Gruen is the #1 New York Times and USA Today bestselling author of At the Water’s Edge,Water for Elephants, Ape House, Riding Lessons, and Flying Changes. Her works have been translated into forty-three languages and have sold more than ten million copies worldwide. Water for Elephants was adapted into a major motion picture starring Reese Witherspoon, Rob Pattinson, and Christoph Waltz in 2011. She lives in western North Carolina with her husband and three sons, along with their dogs, cats, horses, birds, and the world’s fussiest goat.

"[An] arresting new novel. . . . At its finest, Water for Elephants resembles stealth hits like 'The Giant's House,' by Elizabeth McCracken, or 'The Lovely Bones,' by Alice Sebold, books that combine outrageously whimsical premises with crowd-pleasing romanticism. . . . Black-and-white photographs of real American circus scenes from the first half of the century are interspersed throughout the novel, and they brilliantly evoke the dignified power contained in the quieter moments of this unusual brotherhood. . . . With a showman's expert timing, [Gruen] saves a terrific revelation for the final pages, transforming a glimpse of Americana into an enchanting escapist fairy tale."—New York Times Book Review

“Novelist Gruen unearths a lost world with her rich and surprising portrayal of life in a traveling circus in the '30s. An emotional tale that will please history buffs--and others.”—People

“A compulsive page-turner . . . a fascinating setting and a richly anecdotal story that's enjoyable right up to the final, inevitable revelation.”—The Onion

“A rich surprise, a delightful gem springing from a fascinating footnote to history that absolutely deserved to be mined.”—Denver Post

“One of the many pleasures of this novel is the opportunity to enter a bizarrely coded and private world with its own laws, superstitions and vocabulary. . . . I couldn't bear to be torn away from it for a single minute.”—Chicago Tribune

“You'll get lost in the tatty glamour of Gruen's meticulously researched world, from spangled equestrian pageantry and the sleazy side show to an ill-fated night at a Chicago speak-easy.”—Washington Post

"Riveting." —The Toronto Globe and Mail

“Life is good for Jacob Jankowski. He’s about to graduate from veterinary school and about to bed the girl of his dreams. Then his parents are killed in a car crash, leaving him in the middle of the Great Depression with no home, no family, and no career…This lushly romantic novel travels back in forth in time between Jacob’s present day in a nursing home and his adventures in the surprisingly harsh world of 1930s circuses…just like a circus, the magic of the story and the writing convinces you to suspend your disbelief.”—Booklist

“Old-fashioned and endearing, this is an enjoyable, fast-paced story.”—Library Journal

A "page-turner...Gruen skillfully humanizes the midgets, drunks, rubes and freaks who populate her book."—Publishers Weekly

“In this thrilling, romantic story set in a traveling circus in the 1930s, Sara Gruen has a Big Top’s worth of vivid characters and an exhilarating narrative that kept me up all night.  From the perseverance of a terrier named Queenie, to the charm of Rosie the elephant, this masterpiece of storytelling is a book about what animals can teach people about love.” —Susan Cheever, author of My Name Is Bill

"The circus, the Great Depression, a complex elephant, equally complex love, the mists and twists of memory articulated in the utterly winning voice of a very old man who's seen it all—these are the irresistible elements of Water for Elephants.  Sara Gruen has written an utterly transporting novel richly full of the stuff of life." —Robert Olen Butler

"So much more than a tale about a circus, Water for Elephants is a compelling journey not only under the big top, but into the protagonist's heart. Sara Gruen uses her talent as a writer to bring that world alive for the reader: I could smell it, taste it, feel every word of it. This is a fiction reader's dream come true." —Jeanne Ray, author of Julie and Romeo Get Lucky

“Gorgeous, brilliant, and superbly plotted, Water for Elephants swept me into the world of the circus during the Depression and it did not let me go until the very end. I don’t think it has let me go even now. Sara Gruen has a voice to rival John Irving’s, and I am hopelessly, unabashedly in love with this book. Read it.” —Joshilyn Jackson, author of Gods in Alabama

“An entirely original, captivating story of finding love in a down-at-the-heels traveling circus in the Great Depression. Sara Gruen writes with great tenderness and breathtaking drama which makes the novel impossible to put down.” —Stephanie Cowell, author of Marrying Mozart

"Gritty, sensual and charged with dark secrets involving love,murder and a majestic,mute heroine (Rosie the Elephant)."—Parade