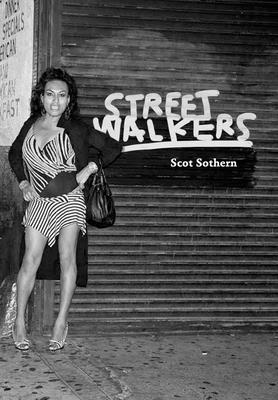 In the mid 1980s photographer and writer Scot Sothern embedded himself in the dark inner-city hallows of Los Angeles and took photographs and wrote about what he saw. He shone a light upon the discarded people whose daily existence consisted of glass pipes and slaps across the face, men and women who never had a chance in this world. In 2011, 25 years after beginning the project, this documentation led to his first solo show, Lowlife, at the notorious Drkrm Gallery in Los Angeles. Previously dormant, undiscovered, and rejected by a plethora of editors and curators, this show brought much attention to Sothern and lead to two books: one of photographs called Lowlife and a memoir called Curb Service. Sothern's work has since become an Internet live wire eliciting either accolades or condemnation from anyone who comes across it.

Streetwalkers is a bleak, real examination of street prostitution in contemporary America by an artist and writer whose own illicit compulsions and literary muscle inform every page. This is the complete collection of Sothern's work from the Lowlife years as well as from recent shoots. In addition, included are his features from "Nocturnal Submissions," his online column for VICE magazine. With new work and previously unpublished stories, this 30-year project is now final and should continue to cause strong reactions from all who see it.

Writer-photographer Scot Sothern spent 40 years hustling work and drifting from job to job. His first exhibit, “LOWLIFE,” was held at the notorious Drkrm Gallery in Los Angeles in 2010. His first book, LOWLIFE, was published in the U.K. by Stanley Barker in 2011. Sothern has since had solo shows on both coasts of the U.S. as well as in Ottawa and London. The British Journal of Photography called LOWLIFE, “The year’s most controversial photobook.” At VICE magazine since 2013, writing the columns “Nocturnal Submissions” and “Sothern Exposure,” Sothern has published more than 50 photoillustrated stories. In 2013, Curb Service: A Memoir was published by Soft Skull Press, and An American Lowlife, a digital photobook, was published by powerHouse Books. Sothern maintains a blog, www.scotsothern.com.

Scot Sothern has bravely and empathetically entered a hidden world of humanity. A place where the human condition bares itself on all levels. This penetrating book of photographs and text will haunt and challenge the viewer .
-Roger Ballen

Scot Sothern’s Streetwalkers is a work of such phenomenal vision, fearless commitment and sheer physical immersion that no reader who joins the author on his plunge into the low-end psycho-sexual wilds of Tijuana and Los Angeles will emerge unaffected. Few authors have the nerve - or the unvarnished demented need —  to put themselves in the places Sothern goes. More than a book, Streetwalkers is a riveting, one-of-a-kind journey to the heart of civilization’s darkest desires. An absolutely amazing and essential book.
-Jerry Stahl

The visceral photographs and stories of Scot Sothern’s compelling Streetwalkers reveal the loneliness of desire and the hopefulness of despair. This is raw life without filter, unsentimental, unsparing, brutally beautiful.
- Tara Ison, author of BALL