Smithsonian Civil War in 3D: The Life and Death of the Solider (Kit) 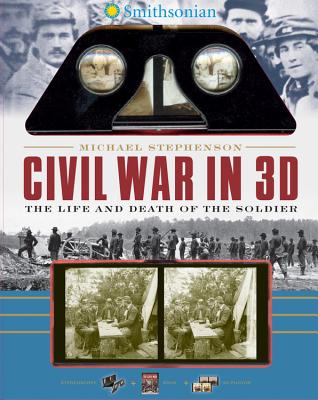 By Michael Stephenson, Smithsonian Institute
Please call for price (310) 659-3110.
Out of Print

The everyday experiences of Union and Confederate soldiers are vividly captured in historic 3D images, seen through an accompanying stereoscopic viewer, in this unique book-and-box format.

The life of a soldier during the Civil War, whether Union or Confederate, was brutally hard and tremendously bleak in ways that are difficult to fathom. Yet, the war also had its moments of heroism, pride, and humanity. The Civil War in 3D transports us to this defining time in our country's history and puts us right in the middle of the battlegrounds.

This unique book-and-box format includes 35 stereoscopic photographs, a sturdy metal stereoscopic viewer through which to see them, and a 176-page illustrated paperback book that tells of the war from the soldiers' perspective, including firsthand descriptions in the form of letters and diaries. What they ate, where they slept, how they filled the long hours while waiting for the next battle to start, and other aspects of their gritty existence are presented along with a timeline of the war that puts the experiences described into context.

The 35 3D photographs, many culled from the Smithsonian archive, include images of soldiers building winter quarters, preparing food in the mess hall, bathing in a river in Virginia, waiting at the depot to be transported to the front lines, building roads, following the wagon trains from battle to battle, and recuperating from wounds in hospitals. Detailed descriptions of the scenes depicted in the photographs are included on the back of each card.

Michael Stephenson is an editor, military historian, and the author of numerous books, including The Last Full Measure: How Soldiers Die in Battle, Patriot Battles: How the War of Independence Was Fought, National Geographic's Battlegrounds: Geography and the History of Warfare, and The Nuclear Dictionary. Stephenson is also the former editor of the Military Book Club. He lives in New York City.

Smithsonian Institution is the most visited museum complex in the world, with more than 30 million annual visitors.