Crossroads: Extraordinary Recipes from the Restaurant That Is Reinventing Vegan Cuisine (Hardcover) 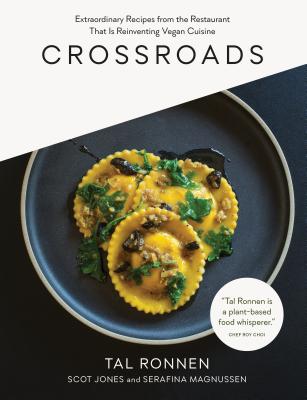 Reinventing plant-based eating is what Tal Ronnen is all about. At his Los Angeles restaurant, Crossroads, the menu is vegan, but there are no soybeans or bland seitan to be found. He and his executive chef, Scot Jones, turn seasonal vegetables, beans, nuts, and grains into sophisticated Mediterranean fare—think warm bowls of tomato-sauced pappardelle, plates of spicy carrot salad, and crunchy flatbreads piled high with roasted vegetables. In Crossroads, an IACP Cookbook Award finalist, Ronnen teaches readers to make his recipes and proves that the flavors we crave are easily replicated in dishes made without animal products. With accessible, unfussy recipes, Crossroads takes plant-based eating firmly out of the realm of hippie health food and into a cuisine that fits perfectly with today’s modern palate. The recipes are photographed in sumptuous detail, and with more than 100 of them for weeknight dinners, snacks and appetizers, special occasion meals, desserts, and more, this book is an indispensable resource for healthy, mindful eaters everywhere.

Tal Ronnen, founder and chef of Crossroads Kitchen in Los Angeles and author of the New York Times bestseller The Conscious Cook, became known nationwide as the chef who prepared the meals for Oprah Winfrey’s 21-day vegan cleanse. He has made his culinary mark at a number of high-profile events, having catered Ellen DeGeneres and Portia de Rossi’s wedding, Arianna Huffington’s party at the Democratic National Convention, and U.S. Senate dinners. A graduate of the Natural Gourmet Institute, Ronnen is the co-creator of Kite Hill Cheese, the first nondairy cheese sold at the high-end cheese counter at Whole Foods, and is a collaborating chef at the Wynn and Encore hotels in Las Vegas.

“If you can't get a reservation at LA's premier vegan fine dining hot spot Crossroads Kitchen, you can at least learn to cook its incredible dishes at home thanks to this cookbook from chef Tal Ronnen. This is pretty much the best vegan food in LA, meaning it's pretty much the best vegan food anywhere, from warm kale and artichoke dip to acorn squash ravioli with black garlic butter sauce.”
—Vice, The Best Cookbook Gifts for Vegans

“Sophisticated vegan recipes . . . that even carnivores will love.”
—Eater LA

“Teach[es] even non-chefs how to make vegan culinary magic in their own kitchen.”
—Well + Good

“If you’re eating from the new Crossroads cookbook by acclaimed chef Tal Ronnen, you’re eating some of the best, most inventive, freshest and satisfying vegan food on the planet.”
—Food Republic

“Tal Ronnen’s food philosophy isn’t unusual for a chef of his caliber. It also isn’t complicated. Simply put: taste above all. And then you realize he’s vegan, an approach to eating that too often has been defined by foods so virtuous they taste worse than the packaging they come in. Except that’s not Ronnen’s game. For him, it doesn’t matter if the food is raw, organic, vegetarian, vegan, local, gluten-free, animal-free, free range or free spirit. If it doesn’t taste great, he isn’t interested. . . . His main courses center around vegetables that aren’t disguised as burgers or steaks or other meaty dishes. Rather, they deliver savory, meaty flavors on their own power, things like roasted shiitake mushrooms that pack in crispy bacon-esque flavor in a salad or pureeing yellow tomatoes into a creamy bearnaise sauce.”
—Associated Press

“This beautifully photographed collection of 100 Mediterranean-inspired recipes captures the spirit of [Ronnen's] restaurant, and shows how sophisticated vegan cuisine can be in the hands of someone who is trained in classical French cooking. But these aren't overly complicated chef recipes with long lists of unfamiliar ingredients. And these aren't dishes centered on faux meats or tofu. Instead, these are dishes that put vegetables front and center, showing how glorious vegetables can be."
—Portland Oregonian

“Carnivores and vegans and everyone in between will find Crossroads to be an irreplaceable resource for healthful eating. . . . We’ve never seen vegan dishes as universally flavorful.”
—Natural Solutions

“This beautifully illustrated book, dense with recipes that combine flavors in unexpected ways, is destined to be one of the most splattered in my carnivorous kitchen.”
—Norfolk Virginian-Pilot

“Tal Ronnen proves that cooking lower on the food chain can be more exciting than grilling a T-bone. Skeptical? Try his linguine with balsamic-roasted mushrooms and tomato-basil butter.”
—Modern Farmer

“In his second vegan cookbook (after The Conscious Cook), Crossroads founder and chef Ronnen tackles such issues as sustainabilty, health, and taste. With so many ways to approach plant-based food, the theme of Mediterranean flavor is employed to tie together all of the recipes packed into these pages. This book wonderfully includes all types of recipes, from quick snacks to full meals. The varieties of preparations and flavors include pistachio-kalamata tapenade in the spreads section, charred okra flatbread with sweet corn puree and cherry tomatoes, a small-plate dish consisting of fig caponata with polenta fries, and oat Florentine cookies with mocha chocolate. There is also a small section on pantry staples, such as almond-based Greek yogurt and demi-glace, that go well with nearly any vegetable.”
—Publishers Weekly, starred review

“Though at least one vegan cookbook arrives at my door every week, I’ve never been intrigued enough to review any of them. Then Crossroads arrived, and my vegan-avoidance vanished. Chef and author Tal Ronnen is a classically trained pro who cooks Mediterranean food that’s all plant-based and all wonderful—robust, textured and flavorful enough to satisfy the cravings of carnivores and omnivores. His cooking is not about finding substitutes for meat, but about creating exciting vegetable-centric dishes that will never elicit an exasperated “Where’s the beef?” Ronnen’s recipes are not quick fixes, but they are truly worth the extra time and thought. Some are right for casual weeknights, some for weekend dinner parties. No-hassle Pickled Vegetables are great anytime, while Leek Pâté with Lentil Skillet Bread is a grand starter for a grand dinner. I could eat fabulous Fig Caponata with Polenta Fries every day, not to mention meaty Fried Oyster Mushrooms and herb ricotta (made from almonds) stuffed Cappellacci with vibrant Spinach Cream Sauce. Finish up with a divinely Decadent Dark Chocolate Cake.”
—BookPage

“Tal Ronnen is a magician—every time I eat his food, I find myself wanting more and more, and I never miss the butter or bacon fat.”
—Michael Voltaggio, chef and owner, ink.

“Tal Ronnen is a plant-based food whisperer, and now with this book, he and Scot Jones allow us to understand the message. In a world where it’s becoming more and more unrealistic to raise animals for food, it’s time to listen to what the plants are telling us and cook some of these awesome creations.”
—Roy Choi, chef and author of L.A. Son

“Chefs Tal Ronnen and Scot Jones are artists of the highest order. The details that separate us. Whether a dish is vegan or not, disappears in the hands of a true artist. It's just great.”
—Jay-Z