War and the Iliad (Paperback) 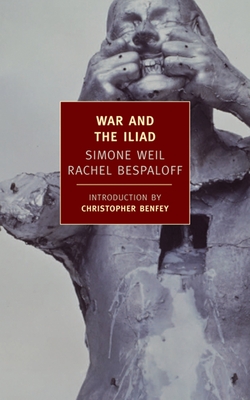 War and the Iliad is a perfect introduction to the range of Homer's art as well as a provocative and rewarding demonstration of the links between literature, philosophy, and questions of life and death.

Simone Weil's The Iliad, or the Poem of Force is one of her most celebrated works--an inspired analysis of Homer's epic that presents a nightmare vision of combat as a machine in which all humanity is lost. First published on the eve of war in 1939, the essay has often been read as a pacifist manifesto. Rachel Bespaloff was a French contemporary of Weil's whose work similarly explored the complex relations between literature, religion, and philosophy. She composed her own distinctive discussion of the Iliad in the midst of World War II--calling it "her method of facing the war"--and, as Christopher Benfey argues in his introduction, the essay was very probably written in response to Weil. Bespaloff's account of the Iliad brings out Homer's novelistic approach to character and the existential drama of his characters' choices; it is marked, too, by a tragic awareness of how the Iliad speaks to times and places where there is no hope apart from war.

This edition brings together these two influential essays for the first time, accompanied by Benfey's scholarly introduction and an afterword by the great Austrian novelist Hermann Broch.

Simone Weil (1909–1943) was one of the first female graduates of the École Normale Supérieure and taught philosophy in provincial schools from 1931 to 1938. A socialist, she worked for a time on the Renault assembly line and volunteered to fight against the Fascists in the Spanish Civil War. In 1938, a mystical vision led Weil to convert to Roman Catholicism, though she refused the sacrament of baptism. Weil fled France for the United States in 1942, where, in solidarity with the people of Occupied France, she drastically limited her intake of food, so hastening her early death from tuberculosis.

Rachel Bespaloff (1895–1949) was born to a Ukrainian Jewish family—her father was the Zionist theoretician Daniel Pasmanik—and raised in Geneva. Bespaloff intended to pursue a musical career, but after an encounter with the thinker Leo Shestov, she devoted herself to the study of philosophy. One of the first French readers of Heidegger, Bespaloff published essays in the 1930s about Kierkegaard, Gabriel Marcel, André Malraux, and Julien Green, among other philosophers and writers. In 1942, she left France for the United States, where she worked as a scriptwriter for the French Section of the Office of War Information before teaching French literature at Mount Holyoke. In 1949, Rachel Bespaloff committed suicide, leaving a note that said she was “too fatigued to carry on.”

Hermann Broch (1886-1951) was the author of The Sleepwalkers and The Death of Virgil, among other novels.

"War and the Iliad joins together for the first time in a single volume Simone Weil’s ferocious lament ('The Iliad or the Poem of Force'), with her less well known contemporary Rachel Bespaloff’s antiphonal meditation on conflict, pacifism and justice. Mary McCarthy was the original translator, and her luminous work is reprinted here."
— Marina Warner, The Times Literary Supplement “Book of the Year”

“Written just before and during the second world war, these two long essays unearth a set of moral teachings antecedent to the Gospels, estranged by history but profoundly relevant to our time. Homer’s Iliad is remarkable, the essayists agree, for presenting warring sides with equal compassion. As Weil writes, only the person 'who has measured the dominion of force, and knows how not to respect it', is capable of justice and love.” Greg Jackson, The Guardian

"The publication of Simone Weil’s essay…[was] an event of great importance to those of us who read it. This is one of the most moving and original literary essays ever written."
— Elizabeth Hardwick

"In the early months of the Second World War two brilliant and despairing French women of Jewish background each wrote an essay on the Iliad. Weil’s 'The Iliad, or The Poem of Force', and Bespaloff’s 'On the Iliad' remain the twentieth century’s most beloved, tortured, and profound responses to the world’s greatest and most disturbing poem. Before the world ended, Mary McCarthy had translated both essays into English, and plans were soon made to publish them together in a book, but to no avail. Here, thanks to NYRB (one of the very few happy innovations in contemporary publishing), the two are finally between the same covers. This is an especially important service for Bespaloff’s essay, which has never been readily available as Weil’s."
— Benjamin Schwarz, The Atlantic Monthly