Lentil Underground: Renegade Farmers and the Future of Food in America (Paperback) 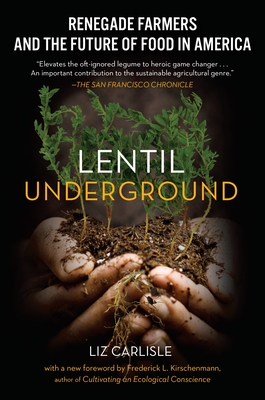 A protégé of Michael Pollan shares the story of a little known group of renegade farmers who defied corporate agribusiness by launching a unique sustainable farm-to-table food movement.

The story of the Lentil Underground begins on a 280-acre homestead rooted in America’s Great Plains: the Oien family farm. Forty years ago, corporate agribusiness told small farmers like the Oiens to “get big or get out.” But twenty-seven-year-old David Oien decided to take a stand, becoming the first in his conservative Montana county to plant a radically different crop: organic lentils. Unlike the chemically dependent grains American farmers had been told to grow, lentils make their own fertilizer and tolerate variable climate conditions, so their farmers aren’t beholden to industrial methods. Today, Oien leads an underground network of organic farmers who work with heirloom seeds and biologically diverse farm systems. Under the brand Timeless Natural Food, their unique business-cum-movement has grown into a million dollar enterprise that sells to Whole Foods, hundreds of independent natural foods stores, and a host of renowned restaurants.

From the heart of Big Sky Country comes this inspiring story of a handful of colorful pioneers who have successfully bucked the chemically-based food chain and the entrenched power of agribusiness’s one percent, by stubbornly banding together. Journalist and native Montanan Liz Carlisle weaves an eye-opening and richly reported narrative that will be welcomed by everyone concerned with the future of American agriculture and natural food in an increasingly uncertain world.

Liz Carlisle holds a BA from Harvard University and a PhD in geography from the University of California at Berkeley. Carlisle is also a country music singer-songwriter who has opened shows for Travis Tritt, LeAnn Rimes, and Sugarland. She currently lives in Berkeley, California.

“What does it take to farm sustainably—and make a living? Liz Carlisle tells the engrossing story of the ‘audacity rich but capital poor’ Montana farmers who thought lentils were the answer and stuck with them until proved right. Anyone who dreams of starting a farm or wants to know how organic farmers can overcome the obstacles they face will be inspired by this book.”
—Marion Nestle, professor of nutrition, food studies, and public health at New York University and author of Food Politics

“These farmers demonstrate how to build democracy and build soils at the same time. What a deal!”
—Frances Moore Lappé, author of Diet for a Small Planet and EcoMind

“Liz Carlisle’s new book is an absolute treasure—actual stories of real farmers in a part of Montana,  some of whom found that their industrial farming practices were a “losing game” and some who discovered that locally adapted organic farming could be resilient and economically successful. It is a must read for anyone interested in the future of food in America.”
—Frederick Kirschenmann, Author of Cultivating an Ecological Conscience

“Who knew? This book tells the fascinating story from one corner of the ongoing rural renaissance—it will resonate and fascinate, and it will leave you looking for ways to get involved yourself.”
—Bill McKibben, author of Deep Economy

“All of civilization rests on agriculture, and so it follows that real revolutions begin in the soil, which is why the stories of real revolutions must be reported from the ground up, as Liz Carlisle has done so competently in Lentil Underground. Read it, engage the real revolutionaries and begin the understand why their work is so vital to all of us.”
—Richard Manning, author of Against the Grain

“Who’d have thought that a book about lentil farming could be a page-turner? With a voice as clear and powerful on the page as it is onstage, Liz Carlisle writes the struggles of Montana’s farmers as an epic. Their battles with food, finance, health care, and modern capitalism are both inspiring and a timely reminder that populism needn’t be a dirty word.”
—Raj Patel, author of Stuffed and Starved and research professor at the Lyndon B. Johnson School of Public Affairs, University of Texas as Austin
— Praise for Liz Carlisle