Citizenville: How to Take the Town Square Digital and Reinvent Government (Hardcover) 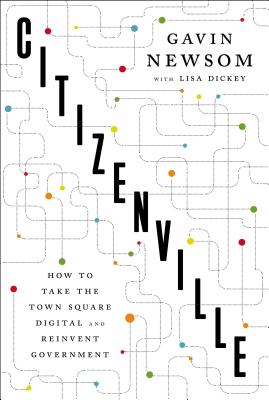 "Citizenville" offers both an impassioned plea for more tech-enabled government and a "tour d'horizon" of the ways some governments have begun using technology to good effect a fast-paced and engaging read --"San Francisco Chronicle"
A rallying cry for revolutionizing democracy in the digital age, "Citizenville "reveals how ordinary Americans can reshape their government for the better. Gavin Newsom, the lieutenant governor of California, argues that today's government is stuck in the last century while in both the private sector and our personal lives absolutely everything else has changed. The explosion of social media, the evolution of Internet commerce, the ubiquity of smart phones that can access all the world's information; in the face of these extraordinary advances, our government appears increasingly irrelevant and out of touch.
Drawing on wide-ranging interviews with thinkers and politicians, Newsom's "Citizenville "shows how Americans can transform their government, taking matters into their own hands to dissolve political gridlock even as they produce tangible changes in the real world. When local Web designers wanted to prevent muggings in Chicago and Oakland, they created innovative crime-mapping tools using public police data. When congressional representatives wanted citizens input on new legislation, they used interactive blogging tools to invite public comments and changes. When a town in Texas needed to drum up civic engagement, officials invented a local digital currency to reward citizens for participating in government making small-town politics suddenly as fun and addictive as online games such as Farmville. Surveying the countless small advances made by ordinary Americans in reinventing government for the twenty-first century, Newsom unveils a path for American prosperity and democratic vitality.
Newsom explains how twenty-first-century problems are too big and too expensive for the government simply to buy solutions; instead, Americans must innovate their way out. Just as the post office and the highway system provide public infrastructure to channel both personal and private enterprise a platform upon which citizens can grow so too could a modern digital government house the needs, concerns, information, and collaboration of an enlightened digital citizenry.
A vision for better government that truly achieves the ancient goal of commonwealth and a triumphant call for individuals to reinvigorate the country with their own two hands, "Citizenville" is a timely road map for restoring American prosperity and for reinventing citizenship in today's networked age.

GAVIN NEWSOM is the forty-ninth lieutenant governor of the State of California, following two terms as mayor of San Francisco. He was the youngest mayor of San Francisco elected in more than a hundred years. Previously, Newsom founded fifteen small businesses in the San Francisco Bay area after graduating from Santa Clara University. He lives in the Bay Area with his wife, Jennifer Siebel Newsom, and their two children.