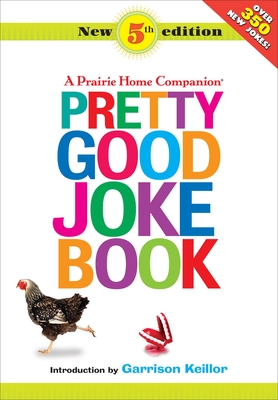 A treasury of hilarity from one of America’s favorite radio shows.

A guy walks into a bar. Eight Canada Geese walk into a bar. A termite jumps up on the bar and asks, “Where is the bar tender?” Drum roll.

The Fifth Edition of the perennially popular Pretty Good Joke Book is everything the first four were and more. More puns, one-liners, light bulb jokes, knock-knock jokes, and third-grader jokes (have you heard the one about Elvis Parsley?). More religion jokes, political jokes, lawyer jokes, blonde jokes, and jokes in questionable taste (Why did the urologist lose his license? He got in trouble with his peers). More jokes about chickens, relationships, and senior moments (The nice thing about Alzheimer’s is you can enjoy the same jokes again and again).

It all started back in 1996, when A Prairie Home Companion fans laughed themselves silly during the first Joke Show. The broadcast was such a hit that it became an almost-annual gagfest. Then fans wanted to read the jokes, share them, and pass them around, and the first Pretty Good Joke Book was born. With 362 new jokes (more or less), the latest edition promises countless giggles, chortles, and guffaws anyone—fans of the radio show or not—will enjoy.

Garrison Keillor is America’s favorite storyteller. For more than 35 years, as the host of A Prairie Home Companion, he has captivated millions of listeners with his weekly News from Lake Wobegon monologues. A Prairie Home Companion is heard on hundreds of public radio stations, as well as America One, the Armed Forces Networks, Sirius Satellite Radio, and via a live audio webcast.

Keillor is also the author of several books and a frequent contributor to national publications including Time, The New Yorker, and National Geographic, in addition to writing his own syndicated column. He has been awarded a National Humanities Medal from the National Endowment of the Humanities. When not touring, he resides in St. Paul, Minnesota.