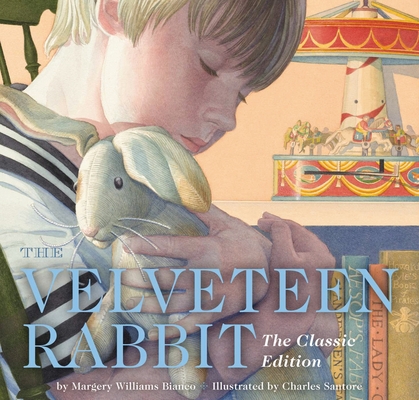 The beloved story of the Velveteen Rabbit, the toy rabbit made real by the love of a boy, is now available in a beautiful heirloom hardcover.

Originally published in 1922, the classic story of a toy rabbit who loves a boy so much he eventually becomes real, has charmed children—and adults—for nearly a century. Author Margery Williams wrote this treasured classic that has warmed many hearts for decades. This story is among the top 100 books for children recommended by the National Education Association, chosen in a 2007 online poll, and also won the IRA/CBC Children's Choice award. This classic edition of The Velveteen Rabbit features:

- A beautifully designed heirloom hardcover with foil stamping
- Lavish illustrations by renowned New York Times #1 Bestselling artist Charles Santore, the critically-acclaimed illustrator of multiple classic tales including The Night Before Christmas, The Classic Tale of Peter Rabbit, and Aesop's Fables
- Three times as many illustrations as the origially published work

Create a family tradition with this wonderful volume and make memories your children will cherish for years.

The work of New York Times bestselling children’s book illustrator Charles Santore has been widely exhibited in museums and celebrated with recognitions such as the prestigious Hamilton King Award, the Society of Illustrators Award of Excellence, and the Original Art 2000 Gold Medal from the Society of Illustrators. He is best known for his luminous interpretations of classic children’s stories, including The Little Mermaid, Alice's Adventures in Wonderland, Snow White, and The Wizard of Oz.

Charles Santore renowned illustrations have been widely exhibited in museums and celebrated with recognitions such as the prestigious Hamilton King Award, the Society of Illustrators Award of Excellence, and the Original Art 2000 Gold Medal from the Society of Illustrators. Santore is best known for his luminous interpretations of classic children’s stories such as Snow White, The Night Before Christmas and Henry Wadsworth Longfellow’s Paul Revere’s Ride, which was named 2004 Children’s Book of the Year for Poetry by the Bank Street College Children’s Book Committee. His illustrations for The Wizard of Oz, which is widely considered to be the quintessential illustrated version, were used as the scenic backdrops for a major television performance of the work.

Margery Williams Bianco was an English-American author, primarily of popular children's books. A professional writer since the age of nineteen, she achieved lasting fame at forty-one with the 1922 publication of the classic that is her best-known work, The Velveteen Rabbit.