Counsel for the Deceived: Case Studies in Consumer Fraud (Paperback) 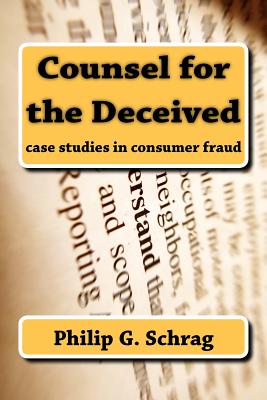 Memoirs and case studies of fraud schemes and consumer protection from an insider who helped to found New York City's first consumer watchdog agency, Counsel for the Deceived is a funny, candid account of fraud and institutional paralysis written by a then-newby lawyer, the city's Consumer Advocate. Philip Schrag was appointed by former Miss America Bess Myerson to defend consumer rights. In six case histories, reading more like a true-crime novel than an academic study, he documents the schemes of the "commercial underworld" and the inability of courts and government agencies to respond in time.

Schrag came into office expecting to initiate a new system, which would at last defend the powerless consumer. Instead, he discovered how both petty criminals and big corporations are able to use the law, the courts, and the status quo to delay and blunt any attacks made upon them. The book tells the fascinating and amusing story of how Schrag's young lawyers and investigators became disillusioned by observing the gap between the promise of the legal system and its actual performance-and how, in reaction, they invented unprecedented methods of consumer protection, some of which cause Schrag himself to question their ethical propriety. Enjoyable as the stories are, their purpose is to raise serious and basic questions about our legal process and its ability to secure consumer justice, or even "law and order."

This book is a unique demonstration of a rare ability to report true crime as it occurs in everyday life. It is a witty and perceptive analysis of the actual working of our government and our courts.

The 40th anniversary edition of this classic, acclaimed book adds thoughtful new material: a Preface by the author and a Foreword by Marc Galanter of the University of Wisconsin-Madison.

Philip G. Schrag is currently a senior professor of law at Georgetown University Law Center and the Director of its Center for Applied Legal Studies.