Ascent of the A-Word: Assholism, the First Sixty Years (Hardcover) 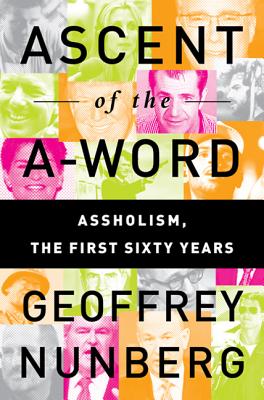 It first surfaced in the gripes of GIs during World War II and was captured early on by the typewriter of a young Norman Mailer. Within a generation it had become a basic notion of our everyday moral life, replacing older reproaches like lout and heel with a single inclusive category--a staple of country outlaw songs, Neil Simon plays, and Woody Allen movies. Feminists made it their stock rebuke for male insensitivity, the est movement used it for those who didn't "get it," and Dirty Harry applied it evenhandedly to both his officious superiors and the punks he manhandled.

The asshole has become a focus of collective fascination for us, just as the phony was for Holden Caulfield and the cad was for Anthony Trollope. From Donald Trump to Ann Coulter, from Mel Gibson to Anthony Weiner, from the reality TV prima donnas to the internet trolls and flamers, assholism has become the characteristic form of modern incivility, which implicitly expresses our deepest values about class, relationships, authenticity, and fairness. We have conflicting attitudes about the A-word--when a presidential candidate unwittingly uttered it on a live mic in 2000, it confirmed to some that he was a man of the people and to others that he was a boor. But considering how much the word does for us, and to us, it hasn't gotten nearly the attention it deserves--at least until now.

Geoffrey Nunberg, a linguist, is a professor at the UC Berkeley School of Information. Since 1987, he has done a language feature on NPR's "Fresh Air," and his commentaries have appeared in the New York Times and many other publications. He is the emeritus chair of the Usage Panel of the American Heritage Dictionary and a winner of the Linguistic Society of America's Language and the Public Interest Award. His previous books include Talking Right and Going Nucular. Nunberg lives in San Francisco.

Kirkus Reviews
“What exactly does it mean to call someone an asshole? When did the epithet come to prominence as a social and now political invective? Who are some of the biggest assholes in the public eye today? These are just a few of the questions that linguist Nunberg explores in this often raucously funny account of what seems to be America’s most popular insult. The author avoids many potential hazards, including an overly academic and pretentious tone or, conversely, an exceedingly snarky or droll satire. In other words, he avoids, by his own surmising, being an asshole himself, thereby rendering a skillful narrative…. A witty and politically charged analysis of a potent obscenity in its modern and contemporary context.”

Booklist
“Only an asshole would say this book is offensive. Sure, it uses the A-word a lot, but this is no cheap attempt to get laughs written by a B-list stand-up comic. The author … undertakes a serious examination of not just the word, but also the concept surrounding it (known as assholism, a type of behavior with, it seems, pretty clear markers)…. An intelligent and wide-ranging study of linguistics, ideas, and social trends.”

PublishersWeekly.com
“An engaging blend of linguistics, analysis, and social commentary that breaks down the important place the word "asshole" occupies in our language and culture…. In the end, Nunberg makes an entertaining and thought-provoking case for the importance and power of a ‘dirty’ word.”

San Francisco Chronicle
“In this delightfully and devilishly trenchant and provocative book, Nunberg traces the use of common and coarse language by well-bred, well-educated critics of Victorian prudery in the 1920s; the spread of the A-word by returning World War II servicemen (and novelist Norman Mailer in The Naked and the Dead); the penchant for obscenities by dissenters in the 1960s and '70s; and, most importantly, changes in ideas about civility, compromise and social class (marked by a shift from power and wealth to lifestyle and attitude as the criteria for membership in the ‘elite’), which paved the way for asshole to become a staple in middle-class conversation and for assholism to become entrenched in political discourse. Nunberg dissects his subject with style and surgical precision.”

Malcolm Jones, Daily Beast
“We are taught that there is no such thing as a Theory of Everything, and that we should beware of anyone nutty enough to claim that you can reduce reality to its gist with one handy explanation-philosophy-catchphrase. But now comes Geoffrey Nunberg with Ascent of the A-Word, a marvelous book that explains so much so well that it’s tempting, really really tempting, to claim that Nunberg has explained everything….Ceaselessly entertaining.”

Cleveland Plain Dealer
“Interesting, and at times provoking, when [Nunberg] uses the word and others like it as a takeoff point for riffs on usage, political correctness and why we sometimes cheer an a - - - - - -…. [Ascent of the A-word] will make you think about whether ‘a - - - - - -’ really is the right word for your boorish neighbor, and what using it says about you.”

Mother Jones
“Linguist Geoffrey Nunberg of the University of California-Berkeley briskly and entertainingly traces how a bit of World War II GI slang became an ubiquitous epithet and a moral category that's come to embody our polarized politics. Though he doesn't buy into simplistic notions of civility, Nunberg is concerned about the toxic side of assholism: When we declare someone an asshole, we're usually giving ourselves leave to act like one.”

B&N Review
“With the hugely enjoyable Ascent of the A-Word we are right on the cutting edge of asshole studies…. Rich and educational ."

Chicago Tribune Printers Row
“Refreshingly uneuphemistic…. Perhaps the most acute pleasure of Ascent of the Aword is having people labeled as they really are.”

Toronto Star
“Nunberg brings all his scholarly oomph to examining the traits that earn one an A-hole label in our culture…. Quirky scholarship at its best.”