David and Goliath: Underdogs, Misfits, and the Art of Battling Giants (CD-Audio) 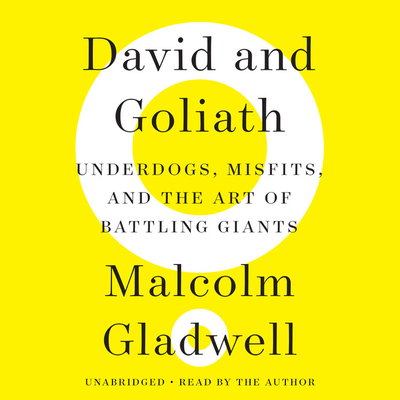 Audie Award Winner, Nonfiction, 2014
Explore the power of the underdog in Malcolm Gladwell's dazzling examination of success, motivation, and the role of adversity in shaping our lives.
Three thousand years ago on a battlefield in ancient Palestine, a shepherd boy felled a mighty warrior with nothing more than a stone and a sling, and ever since then the names of David and Goliath have stood for battles between underdogs and giants. David's victory was improbable and miraculous. He shouldn't have won.

Or should he have?

In David and Goliath, Malcolm Gladwellchallenges how we think about obstacles and disadvantages, offering a new interpretation of what it means to be discriminated against, or cope with a disability, or lose a parent, or attend a mediocre school, or suffer from any number of other apparent setbacks.

Gladwell begins with the real story of what happened between the giant and the shepherd boy those many years ago. From there, David and Goliath examines Northern Ireland's Troubles, the minds of cancer researchers and civil rights leaders, murder and the high costs of revenge, and the dynamics of successful and unsuccessful classrooms---all to demonstrate how much of what is beautiful and important in the world arises from what looks like suffering and adversity.

In the tradition of Gladwell's previous bestsellers---The Tipping Point, Blink, Outliers and What the Dog Saw---David and Goliath draws upon history, psychology, and powerful storytelling to reshape the way we think of the world around us.

Malcolm Gladwell is the author of five New York Times bestsellers: The Tipping Point,Blink, Outliers,What the Dog Saw, and David and Goliath. He is also the co-founder of Pushkin Industries, an audio content company that produces the podcasts Revisionist History, which reconsiders things both overlooked and misunderstood, and Broken Record, where he, Rick Rubin, and Bruce Headlam interview musicians across a wide range of genres. Gladwell has been included in the Time 100 Most Influential People list and touted as one of Foreign Policy'sTop Global Thinkers.

"In the vast world of nonfiction writing, Malcolm Gladwell is as close to a singular talent as exists today...Outliers is a pleasure to read and leaves you mulling over its inventive theories for days afterward."—David Leonhardt, New York Times Book Review

"The explosively entertaining Outliers might be Gladwell's best and most useful work yet...There are both brilliant yarns and life lessons here: Outliers is riveting science, self-help, and entertainment, all in one book."—Gregory Kirschling, Entertainment Weekly

"No other book I read this year combines such a distinctive prose style with truly thought-provoking content. Gladwell writes with a high degree of dazzle but at the same time remains as clear and direct as even Strunk or White could hope for."—Atlanta Journal Constitution

"In Outliers, Gladwell (The Tipping Point) once again proves masterful in a genre he essentially pioneered-the book that illuminates secret patterns behind everyday phenomena."—Publishers Weekly

Praise for The Tipping Point

"A fascinating book that makes you see the world in a different way."—Fortune

"Gladwell's theories could be used to run businesses more effectively, to turn products into runaway bestsellers, and perhaps most important, to alter human behavior."—New York Times

"A real pleasure...Brims with surprising insights about our world and ourselves."—Salon.com