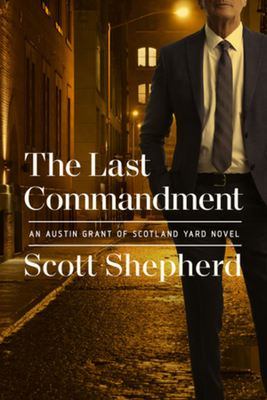 Christmastime in London. When three seemingly unconnected victims are murdered with matching sequential Roman numerals carved into their foreheads, Metropolitan Police Commander Austin Grant finds his answer in one of the last places he’d expect: the Holy Bible. Each of the deaths correspond to a transgression of one of the Ten Commandments, and Grant must find the killer before the remaining Commandments are commemorated with homicides.

Unfortunately for Grant, the next victim with a number on their forehead turns up not in London, but across the pond at the iconic St. Patrick’s Cathedral in New York City, turning this English murder case into a transatlantic manhunt spanning two global metropolises, each with its own rich history and culture. Commander Grant must team up with a charming NYPD detective named John Frankel, as well as his own estranged daughter Rachel—a cunning investigative reporter with conflicting feelings about her father.

The Last Commandment is the third novel by acclaimed screenwriter and producer Scott Shepherd, whose decades of television writing experience shine through in the swift pace and character-driven storytelling of this devilishly fun, page-turning mystery. Flipping the “buddy cop” story on its head with a touch of Old Testament fatalism, this twisty tale leads from the seedy back-alleys of Piccadilly to the Grande Dame hotels of Midtown Manhattan and back again.

Scott Shepherd is a veteran writer/producer/show-runner with years of experience running network series; his production and screenwriting credits include The Equalizer, Miami Vice, The Outer Limits, Haven, and Quantum Leap. Born in New York and raised in Los Angeles, he currently teaches television writing at the University of Texas in Austin. The Last Commandment is his first mystery novel.

Called to mind Thomas Harris’ earlier work --- a serial killer novel with just the right amount of intensity, suspense and a clever murderer who always seems to be one step ahead of everybody else.
— Bookreporter

A serial killer seems to be taking his cues from Agatha Christie and Ellery Queen [...] A fast-paced tale that weds its golden-age homage to some serious violence. Sinners beware.
— Kirkus

The intensifying, suspenseful investigation ends in a shocking, made-for-TV reveal [...] The fast-paced story and twisted villain will appeal to fans of crime dramas.
— Library Journal

An enthralling mystery that will hook you on the very first page and keep you turning until the last. Shepherd’s signature storytelling is on full display in THE LAST COMMANDMENT.
— Karin Slaughter, New York Times bestselling author

Scott Shepherd is a marvelous storyteller, and The Last Commandment is further proof of his abilities. Smart, funny, and layered with a terrific sense of time and place, the story rockets from one twist to the next while always deepening the questions of family, trust, and the weight of old sins. A gem of a thriller, not to be missed.
— Michael Koryta, New York Times bestselling author

Scott Shepherd is a dazzling storyteller, whose authentic and richly textured characters and clever, pulsating plotting captivate. THE LAST COMMANDMENT is a riveting and wondrously satisfying thriller with that all too rare commodity: abundant heart and soul.
— May Cobb, author of The Hunting Wives

Written in taut, tight chapters that land like a hail of bullets. You’ll race through this story.
— Brian Freeman, New York Times bestselling author of THE DEEP, DEEP SNOW