The First King of Hollywood: The Life of Douglas Fairbanks (Hardcover) 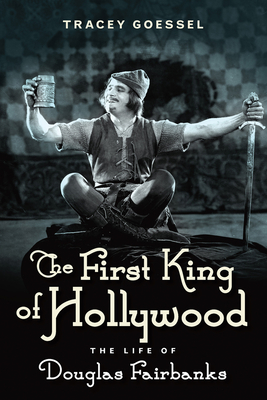 Silent film superstar Douglas Fairbanks was an absolute charmer. Irrepressibly vivacious, he spent his life leaping over and into things, from his early Broadway successes to his marriage to the great screen actress Mary Pickford to the way he made Hollywood his very own town. The inventor of the swashbuckler, he wasn’t only an actor—he all but directed and produced his movies, and in founding United Artists with Pickford, Charlie Chaplin, and D. W. Griffith, he challenged the studio system.

But listing his accomplishments is one thing and telling his story another. Tracey Goessel has made the latter her life’s work, and with exclusive access to Fairbanks’s love letters to Pickford, she brilliantly illuminates how Fairbanks conquered not just the entertainment world but the heart of perhaps the most famous woman in the world at the time.

When Mary Pickford died, she was an alcoholic, self-imprisoned in her mansion, nearly alone, and largely forgotten. But she left behind a small box; in it, worn and refolded, were her letters from Douglas Fairbanks. Pickford and Fairbanks had ruled Hollywood as its first king and queen for a glorious decade. But the letters began long before, when they were both married to others, when revealing the affair would have caused a great scandal.

Now these letters form the centerpiece of the first truly definitive biography of Hollywood’s first king, the man who did his own stunts and built his own studio and formed a company that allowed artists to distribute their own works outside the studio system. But Goessel’s research uncovered more: that Fairbanks’s first film appearance was two years earlier than had been assumed; that his stories of how he got into theater, and then into films, were fabricated; that the Pickford-Fairbanks Studios had a specially constructed underground trench so that Fairbanks could jog in the nude; that Fairbanks himself insisted racist references be removed from his films’ intertitles; and the true cause of Fairbanks’s death.

Fairbanks was the top male star of his generation, the maker of some of the greatest films of his era: The Thief of Bagdad, Robin Hood, The Mark of Zorro. He was fun, witty, engaging, creative, athletic, and a force to be reckoned with. He shaped our idea of the Hollywood hero, and Hollywood has never been the same since. His story, like his movies, is full of passion, bravado, romance, and desire. Here at last is his definitive biography, based on extensive and brand-new research into every aspect of his career, and written with fine understanding, wit, and verve.

Tracey Goessel is on the board of directors of the San Francisco Silent Film Festival and is the founder of the Los Angeles–based Film Preservation Society. She has published numerous articles on silent film history and has lectured widely on Douglas Fairbanks. She is a major collector of silent film ephemera, and her purchase of the Pickford-Fairbanks love letters started an eight-year quest to write the definitive biography of America's favorite swashbuckler.

“one of the most delightful Hollywood biographies to slide down the mast in years.” —New York Times Sunday Review

“Tracey Goessel's biography of Douglas Fairbanks is impeccably researched and elegantly written. It gives new relevance to one of the seminal figures of 20th century movies and manhood, and at the same time it gives us an amazingly intimate view of the tragic love affair between Fairbanks and Mary Pickford. This is not merely a worthy book, it's a necessary book.” —Scott Eyman, author of John Wayne: The Life and Legend and Empire of Dreams: The Epic Life of Cecil B. DeMille

“Tracey Goessel gives us for the first time the real, three-dimensional man, in all his vibrancy, creativity, and sexiness. Beyond being a mega-star, he was a daring, hands-on producer and industry leader.” —Cari Beauchamp, historian, journalist, and author of Joseph P. Kennedy Presents: His Hollywood Years

“A lively biography of a lauded actor.” —Kirkus Reviews

“Tracey Goessel has researched Fairbanks’s life and work more thoroughly than anyone before her, and her book will undoubtedly become a classic among film biographies.”   —Kevin Brownlow, author, The Parade's Gone By

“[The] prose is exuberant, buoyant and filled with humor, much like Fairbanks himself.” —Strictly Vintage Hollywood

“In an epic new biography, pioneering film star Douglas Fairbanks finally gets an in depth exploration of his eventful life. This entertaining book is heavy on the detail, but also humorous and full of compassion for its subject.” —A Classic Movie Blog