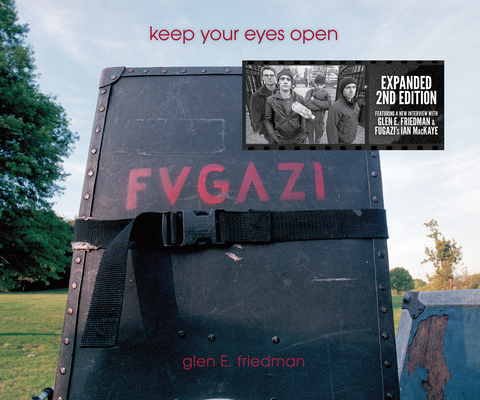 A second edition of the definitive photo book of one of the most influential rock bands of the past forty years, including brand-new, exclusive material.

"Photographer Glen E. Friedman has taken some of the most iconic photos in skateboarding, punk rock and hip hop. Known for capturing the raw energy of a counterculture generation in its prime, his photography helped shape the way people view punk music and redefined the sport of skateboarding."
--q (CBC Radio)

"Friedman...marvelously captures Fugazi's] non-hierarchical structure and spirit...These images bristle with the manic yet controlled energy that characterized all of Fugazi's performances. Sweat sparkles, bodies contort themselves, microphone stands fly off the stage."
--Bookforum

"This new and expanded edition features an additional interview with MacKaye and Friedman, and, much to the relief of Fugazi and photography fans, is far easier to get hold of. With almost 200 photos to gawk at, it's an absolute treat for the senses...If it were possible for pictures to trigger your senses, you would smell the stale sweat, feel the dry mouth from a lack of hydration, hear every line being belted out in full force."
--Punktastic

"It is...a testament to Friedman that his live stage shots express the intimacy of the moment but don't insert themselves nor distract from the band...Keep Your Eyes Open is its most successful when Friedman lets the photographs bloom in their richness with full page presentations."
--New York Journal of Books

"But the main focus in this photo book, is--of course--the photos. Almost 200 color and b/w images captured by Friedman onstage and off between 1986 and Fugazi's last US concert in 2002."
--Trust (Germany)

Fugazi, one of music's most revolutionary and gloriously indefinable bands, played their first concert on September 3, 1987. The first edition of Keep Your Eyes Open: The Fugazi Photographs of Glen E. Friedman was released by Burning Flags Press exactly twenty years later. This revised edition features brand-new photos and an interview with Friedman and Fugazi singer/guitarist Ian MacKaye.

Keep Your Eyes Open presents the best of Friedman's unparalleled photographic documentation of Fugazi's members in almost 200 color and black-and-white images captured by Friedman onstage and off between 1986 and Fugazi's last US concert in 2002.

Fugazi evolved from Washington, DC's, hardcore punk scene of the late 1970s and early 1980s. While it would be impossible to fully capture Fugazi in any one medium, Friedman's book effectively complements the band's Dischord Records catalog, which includes seven studio albums, one soundtrack, three EPs, and hundreds of live concert CDs produced from Fugazi's own soundboard recordings.

Fugazi--a band dedicated to democratic self-management, highlighted by complete artistic and financial control--booked its own tours worldwide, and was often the first band to perform in unconventional venues around the world in order to maintain ticket prices that averaged just five dollars, a practice that opened many new venue doors to other touring artists. In addition, Fugazi has never marketed or licensed its name or likeness for posters, T-shirts, pins, or other ancillary merchandise items. Fugazi's unwavering respect for its audience is one of the band's most indelible marks on modern music. The band went on indefinite hiatus in late 2002.

Glen E. Friedman, one of the most important photographers of his generation, is known for his influential and iconic images of rebellious artists from classic skateboarding, punk, and hip-hop cultures. As a true artist his process was much more incendiary than it was documentary. Friedman, first published at the age of fourteen, has produced over 100 record covers, countless magazine pages, and almost a dozen books, including DogTown: The Legend of the Z-Boys. His work is now included in a number of notable international collections, including the Metropolitan Museum of Art and the Smithsonian Institution.Ian F. Svenonius is the author of the underground best sellers Supernatural Strategies for Making a Rock 'n' Roll Group, Censorship Now!!, and The Psychic Soviet. He was also the host of VBS.tv's Soft Focus, a different breed of chat show, where he interviewed Mark E. Smith, Genesis P-Orridge, Chan Marshall, Ian MacKaye, and others. As a musician he has created twenty-one albums and countless singles in various rock 'n' roll combos (Chain & the Gang, Weird War, The Make-Up, The Nation of Ulysses, etc.). He lives in Washington, DC.