We Got the Beat: A Children's Picture Book (Hardcover) 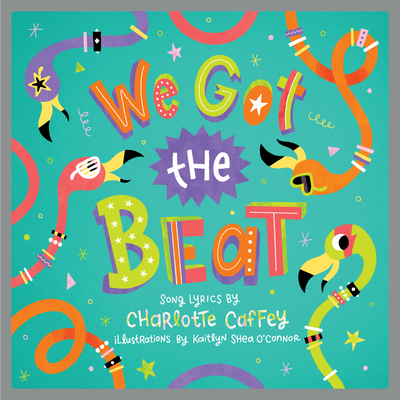 An exuberant celebration of dance and play in picture book form, based on Charlotte Caffey's joyful classic made famous by the Go-Go's.

See the people walking down the street
Fall in line just watching all their feet
They don't know where they want to go
But they're walking in time
They got the beat...

We Got the Beat is a children's picture book based on the hit song by the 1980s new wave group the Go-Go's. Consisting of five members, the all-female band rocked the nation with their charisma and musical genius. Their hit song "We Got the Beat" spent three weeks at #2 on the Billboard 100 and became their signature song. Says the New York Times the Go-Go's "taught a new generation the power of the girl gang."

With lyrics by Go-Go's member Charlotte Caffey and illustrations by Kaitlyn Shea O'Connor, this picture book tells the story of what it is like to live life dancing to the beat, while enjoying friends, nature, and the fun that surrounds you. We Got the Beat will make both parents and children get their groove on and show off their best dance moves.

"Songs like 'We Got the Beat' were built with a timeless durability as solidly constructed as a Motown hit."
--New York Times

Charlotte Caffey is a singer-songwriter best known for being a member of the all-female new wave group the Go-Go's. Caffey wrote the hit single "We Got the Beat" and has cowritten songs for other artists such as Keith Urban and the theme song for the television series Clueless. The Go-Go's became one of the foundational bands of the 1980s, with their 1981 debut album Beauty and the Beat going double platinum and topping US Billboard charts for six weeks. The band has sold more than seven million records across the world. Caffey continues to write and perform.Kaitlyn Shea O'Connor (illustrator) is an illustrator and designer hailing from Atlanta, Georgia. She combines traditional skills with digital media to create vibrant, whimsical worlds. She's a rare hybrid of dog and cat lover, an avid whistler, and she enjoys exploring the great outdoors, trying new cheeses, and cozying up in a nook with a book.