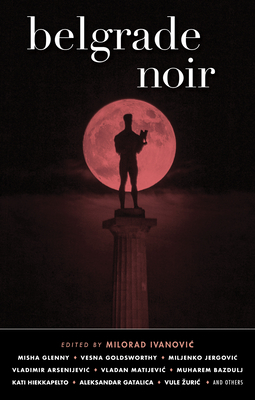 Belgrade, with all of its historical complexity, joins Zagreb and Prague in representing the Eastern European dimension of the Akashic Noir Series.

"History haunts Belgrade...An anthology that has its share of winners."
--Publishers Weekly

You have thieves, traitors, spies, corrupt doctors, psychiatric patients, former policemen, and mafia clans all represented in these stories.
--Journey of a Bookseller

Akashic Books continues its award-winning series of original noir anthologies, launched in 2004 with Brooklyn Noir. Each book comprises all new stories, each one set in a distinct neighborhood or location within the respective city.

From the introduction by Milorad Ivanovic

Belgrade, meaning "White City," is located in Southeast Europe at the confluence of the Sava and Danube rivers...Alfred Hitchcock once said that certain creepy parts of Belgrade unnerved him and would be ideal settings for thrillers. Thieves, traitors, spies, corrupt doctors, psychiatric patients, former policemen, mafia clans--they all appear in the pages of this book.

Even in the worst periods of its history, Belgrade was always a multicultural, multireligious, and multinational city. This anthology illustrates that. Alongside our Serbian authors, there are stories written by Croatian, Bosnian, British, and Finnish writers. The same is true for our great team of translators, which includes Americans, Serbians, Bosnians, and an Albanian...

Right now, you likely believe there are a number of cities throughout the world that would make better settings for good noir stories. But I am quite certain that after reading this book, you will find yourself seduced by the dark charm of the White City.

Milorad Ivanovic is a Serbian investigative reporter and editor. He was editor in chief of the Serbian edition of Newsweek, and executive editor of the daily paper Blic and the weekly publication Novi Magazin. Presently he is an editor at BIRN Serbia in Belgrade. He has a special interest in cross-border journalism and is a member of the International Consortium of Investigative Journalists. His investigations have included work on human trafficking, Balkan mercenaries in Iraq, and clinical trials.