Tales from the Strip: A Century in the Fast Lane (Hardcover) 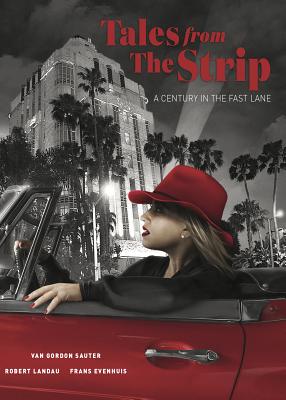 Tales from The Strip: A Century in the Fast Lane is a thought-provoking--and riotous--amble from Doheny to Crescent Heights on America's most famous strip: Sunset.

From its legendary hotels and clubs to its notorious mobsters to its thriving intellectual haunts, life on the Strip from its earliest days makes Tales from The Strip a path of plenty--direct from the keyboard of journalist and raconteur Van Gordon Sauter, with visuals created, researched, curated, and designed by Robert Landau and Frans Evenhuis. The combination is a remarkable romp along Sunset, right into today's landscape, where even Frank Gehry is taking a twenty-first-century hand at shaping the scene.

For everyone who ever danced at the Whisky, bought spats at gangster Mickey Cohen's haberdashery, longed to go to the Playboy Club, frolicked at the Roxy, tangoed at Ciro's, rocked and rolled at Tower Records, or rubbed shoulders with Sir Elton at Book Soup, this book is your book, ready to take you cruising The Strip. The Sunset Strip, of course.

Van Gordon Sauter was an executive vice president of CBS Broadcasting and also served as the president of CBS News and CBS Sports. He was a reporter for newspapers in New Bedford, Detroit and Chicago, and was a correspondent in Vietnam, a television anchorman in Chicago, and the CBS News bureau chief in Paris. A member and former chairman of the California boxing commission, Sauter is the author of three non-fiction books. He is married to Kathleen Brown, former State Treasurer of California. They live in Los Angeles and Ketchum, Idaho.

Robert Landau grew up in Los Angeles just blocks from the Sunset Strip and has dedicated himself to photographing and creating books about various aspects of his native city. His most recent book, Rock 'n' Roll Billboards of the Sunset Strip (Angel City Press, 2012) was critically acclaimed by the New York Times and was awarded the Glen Goldman Art, Architecture and Photography Award. Previous books include Hollywood Poolside (Angel City Press, 1997), Airstream (Peregrine Smith Books, 1984) and Outrageous L.A. (Chronicle Books, 1980). Landau's photographs have been exhibited in museums and galleries worldwide.

Frans Evenhuis moved from his native Amsterdam to Los Angeles in 1977, in part due to his love of movies and warmer weather. With years of experience as an art director, illustrator, and designer of magazines, Evenhuis designs packaging and promotions for current and classic movies for various film studios, particularly Warner Bros. He conceived and produced the critically acclaimed book Hollywood Poolside (Angel City Press, 1997); Tales from The Strip marks his third publishing collaboration with Robert Landau and Angel City Press.