TRI-STATE HEROES of '45: Together With A Year in the Life of a West Virginia Farm Family (Paperback) 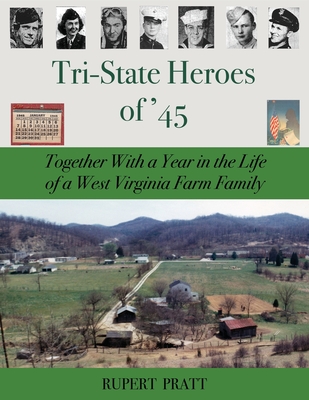 By Rupert Pratt
$36.95
Usually arrives at our store within 4-7 days

In Tri-State Heroes of '45: Together with A Year in the Life of a West Virginia Farm Family, author Rupert Pratt shares the moments and memories woven into the fascinating history of the final year of World War II.

This compilation of local, national, and world events from 1945 showcases the diverse area where West Virginia, Ohio, and Kentucky converge, seen through the perspective of rural life on a little farm in Salt Rock, West Virginia.

Tri-State Heroes of '45 hangs on a framework of diary entries of Pratt's mother, who was thirty-seven that year, while Pratt himself was the young age of twelve. Filled with echoes from the avalanche of events that defined that year, the daily life on Pratt's small farm presents a unique mosaic that tells an unforgettable tale of faith, family, and hope on the home front.

Packed with encouraging vignettes, the book honors the military service members of the Tri-State, with "mini-stories" that appeared in Huntington, West Virginia newspapers. These personalized stories shed light on the tragedies, awards, and survival in the war zones, as well as the relationships that strengthened the resilience of soldiers and civilians alike.

Residents of the Tri-State area will reminisce with appreciation as they look back at this year in which their relatives and friends played a vital role in preserving our nation.
Rupert Pratt grew up on a farm in Salt Rock, West Virginia. After four years in the Air Force, Pratt earned two degrees from Marshall College and taught school in West Virginia and Upstate New York. He and his beloved wife, Millie, raised two sons. He lost Millie in 2013, but now cherishes time spent with his sons, their spouses, and grandchildren. He is also the author of Touching the Ancient One: A True Story of Tragedy and Reunion.