Harder to Breathe: A Memoir of Making Maroon 5, Losing It All, and Finding Recovery (Hardcover) 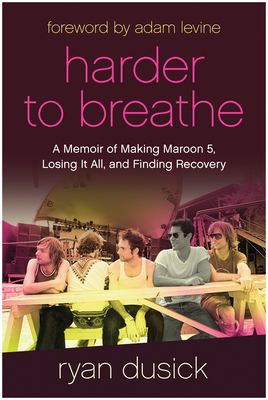 In the nineties, Ryan Dusick and his friends Adam Levine and Jesse Carmichael dreamed about making it big . . . and against all odds, they did. This inside story recounts Maroon 5’s founding and their road to becoming Grammy-winning megastars, told through the eyes of former drummer Ryan Dusick. He takes readers behind the scenes of the band’s meteoric rise to success—and the grueling demands that came with it—as well as his personal struggles with anxiety and addiction after his departure from the band.

For Maroon 5, fame came with a platinum debut record, jam sessions with Prince in his own living room, and encounters with celebrities such as Jessica Simpson, Justin Timberlake, John Mayer, and Bono. For Dusick, stardom came to an abrupt halt with the devastating loss of his ability to play drums due to chronic nerve damage.

Alongside Maroon 5’s story of camaraderie and pressure, Dusick interweaves his own narrative: a decade lost to liquor and antianxiety medication, his ferocious commitment to recovery, and his current perspective as a professional counselor. With a candor that will speak to anyone who has struggled with mental health, Harder to Breathe moves beyond celebrity to examine the nature of human heartbreak and resilience, and to buoy anyone currently facing similar challenges.

Ultimately, Harder to Breathe is a roller-coaster memoir about how making it to the top sent Dusick to the bottom—and how he let go of the past and embraced a new future, one breath at a time.

Ryan Dusick is an Associate Marriage & Family Therapist with an MA in Clinical Psychology and the founding drummer of the world’s most popular band, Maroon 5.

As a boy, he dreamt of pitching for the Dodgers and writing adventure novels. Arm injuries sidelined his burgeoning baseball career, just as rock music became his new passion and purpose. Founding the band Kara’s Flowers in 1994 with fellow Brentwood High School students Jesse Carmichael, Mickey Madden, and Adam Levine, Ryan worked tirelessly through his college years at UCLA before the band changed its name to Maroon 5 and finally had its first hit record, Songs About Jane. Multiple hit songs, two Grammy Awards, and 20 million albums sold later, Ryan found himself suffering and without direction as his career as a performer came to an end, just as it was taking off.

Struggling with physical and mental health challenges, Ryan finally overcame his struggles in 2016, when he began his journey of recovery, culminating in a new life path full of meaning, purpose, and fulfillment. Now working as a mental health professional at The Missing Peace Center for Anxiety in Agoura Hills, CA, Ryan is spreading the message that recovery is possible, and some astounding things can come with it.