One Day You'll Thank Me: Lessons from an Unexpected Fatherhood (Hardcover) 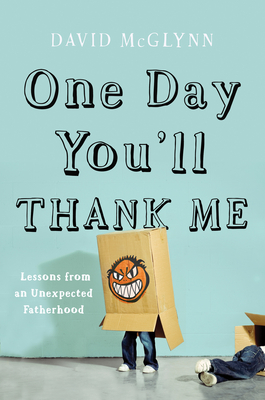 “McGlynn’s trek through young parenthood—missteps, brawls, avalanches, and all—is as entertaining and shrewd as any book I’ve read in some time.” —James McManus, author of Positively Fifth Street


One Day You’ll Thank Me translates the small, often hilarious moments common among parents of young children, especially dads, into “life lessons” about fatherhood. Comprised of interconnected chapters, the stories invoke a sense of humor and honesty that expand our understanding of what it means to be an American dad.

David McGlynn grew up in Houston, Texas, and Southern California. His story collection, The End of the Straight and Narrow, won the 2008 Utah Book Award and was named an "Outstanding Achievement" by the Wisconsin Librarians' Association. His stories and essays have appeared in Men's Health, The Huffington Post, Best American Sports Writing, and numerous literary journals. He teaches at Lawrence University in Appleton, Wisconsin, where he lives with his wife and sons.

A lifelong swimmer, he captured a national championship in the 500–yard freestyle at the 2001 United States Masters National Championships. He continues to compete in open–water swimming races all across the country, and on most mornings is the first one in the pool.

Praise for One Day You’ll Thank Me

"The book is often (painfully) funny . . . The heart of his new book lies in [McGlynn's] willingness to expose the fact that he, like the rest of us, has learned far more from the many parenting failures than from the rare success. To be a parent, says McGlynn, is to hope you are doing things right but to never be sure . . . There’s so much at stake for a parent. So little room for error, and yet, the author reminds us, we err all the time. What’s most important, McGlynn seems to be saying, is not how many errors we make, but how willing we are to confront them. For our children, that willingness may be the greatest gift of all." —Los Angeles Review of Books

"A poignant, funny book about the life of a modern–day dad." —Los Angeles Times

"McGlynn is a fine writer who brings to life the small pleasures of family life—mediating warfare between his boys; teaching a son to ride a bike; buying his eldest a cellphone; and many more." —Toronto Star

"A funny but also substantive collection of observations about parenting . . . One Day You’ll Thank Me pays tribute to the constant effort of parenting, that you never get it absolutely right, but you keep trying to learn from your mistakes." —The Cap Times

"David McGlynn’s reflections on fatherhood are funny and wise . . . McGlynn shows how parenthood is often conflicted—but also full of grace." —The Christian Century

“McGlynn’s trek through young parenthood—missteps, brawls, avalanches, and all—is as entertaining and shrewd as any book I’ve read in some time.” —James McManus, author of Positively Fifth Street

“One Day You’ll Thank Me is a wonderful book with a big heart. David McGlynn tells a timeless story in a personal voice, rich with humor and humanity.” —Susan Casey, author of Voices in the Ocean: A Journey into the Wild and Haunting World of Dolphins, and former editor in chief of O, The Oprah Magazine

"I am grateful for David McGlynn's thoughtful, vulnerable, and often hilarious observations on fatherhood . . . I can use all the help I can get." —Michael Perry, New York Times bestselling humorist

"Fatherhood is probably the scariest good thing that can happen to a man. In this beautifully honest, richly textured, often hilarious dispatch from the home front, David McGlynn illuminates how parenting puts everything into perspective, most of all our own bedeviled selves." —David Giffels, author of Furnishing Eternity: A Father, a Son, a Coffin, and a Measure of Life

"Each brutally honest chapter is filled with heart and humor as McGlynn shares his most tender and most trying moments as a parent . . . All parents will relate and enjoy, but fathers of sons will most certainly relish this charming and hilarious tale of fatherhood." —Booklist

"A pleasing blend of humor and humility that shows what it means to be a father in America today . . . Timeless, funny, and honest stories of raising boys." —Kirkus Reviews