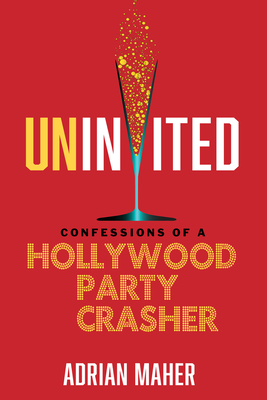 Adrian Maher was a reporter for the Los Angeles Times, and a freelance journalist for UPI, Newsweek, Time Magazine and the L.A. Weekly. He has written, directed, and produced dozens of television programs for Discovery, History, National Geographic, ABC, Fox, MSNBC, and Travel channels. Maher has also taught investigative journalism and documentary film production as an adjunct professor at Chapman University. He holds a bachelor’s degree in English Literature from the University of California at Berkeley and a master’s degree from Columbia University’s Graduate School of Journalism. He lives in Santa Monica, CA.

"Adrian Maher's gate-crasher capers would make any paparazzi proud: an ear for confrontation, a nose for action, and an eye for exquisite details. Nervy, amusing, and surreal. His Hollywood is a ceaseless and hair-raising series of nightly exploits and daily reckonings." —Jennifer Buhl, author of Shooting Stars: My Unexpected Life Shooting Hollywood's Most Famous

"A wackadoodle journey over, under, and around the velvet rope. A laugh-a-minute page-turner as dramatic as any multi-million dollar blockbuster. Hilarious, gripping, and revealing." —Bill Kalmenson, Comedian, Actor, and Host of the hit podcast, "A Rebel Without Applause"

"Adrian Maher's Uninvited is an uproarious account of his party-crashing adventures--and the quirky characters that shared his compulsions. It's also a forthright exploration of his own motives, a keen commentary on celebrity culture, and an offbeat anthropology of contemporary Los Angeles. Consider this your formal invitation to enjoy his madcap memoir." —Peter Richardson, author of No Simple Highway: A Cultural History of the Grateful Dead

"Aided by a Halloween gallery of fellow rogues and adrenaline junkies, Adrian Maher takes us on a joyous romp through backstage Hollywood dodging security, public relations flacks, and his own conscience. You'll be amazed at the chameleon disguises and side-door antics that put an everyman behind the hedge gates and face to face with Clint, Hef, Arianna, and the rest of Tinseltown's high and mighty. Deliciously subversive." —James Rainey, Senior Reporter, Los Angeles Times

"Used to think great gonzo journalism was dead until I picked up this magnificent trip through the world of hilarious party-crashing wackos and their obsessive weekly tango with class, fame, and hors d'oeuvres. I feel better now about gonzo journalism, though the country may be doomed." —Sam Quinones, author of Dreamland: The True Tale of America's Opiate Epidemic