The Unelected: How an Unaccountable Elite Is Governing America (Hardcover) 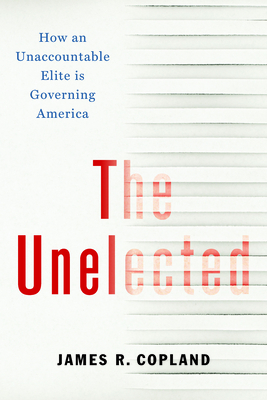 America is highly polarized around elections, but unelected actors make many of the decisions that affect our lives. In this lucid history, James R. Copland explains how unaccountable agents have taken over much of the U.S. government apparatus.

Congress has largely abdicated its authority. "Independent" administrative agencies churn out thousands of new regulations every year. Courts have enabled these rulemakers to expand their powers beyond those authorized by law--and have constrained executive efforts to rein in the bureaucratic behemoth. No ordinary citizen can know what is legal and what is not. There are some 300,000 federal crimes, 98 percent of which were created by administrative action. The proliferation of rules gives enormous discretion to unelected enforcers, and the severity of sanctions can be ruinous to citizens who unwittingly violate a regulation. Outside the bureaucracy, private attorneys regulate our conduct through lawsuits. Most of the legal theories underlying these suits were never voted upon by our elected representatives. A combination of historical accident, decisions by judges and law professors, and self-interested advocacy by litigators has built an onerous and expensive legal regime. Finally, state and local officials may be accountable to their own voters, but some reach further afield, pursuing agendas to dictate the terms of national commerce. These new antifederalists are subjecting the citizens of Wyoming and Mississippi to the whims of the electorates of New York and San Francisco--contrary to the constitutional design. In these ways, the unelected have assumed substantial control of the American republic, upended the rule of law, given the United States the world's costliest legal system, and inverted the Constitution's federalism. Copland caps off his account with ideas for charting a corrective course back to democratic accountability.

An expert in law and economics, James R. Copland is a senior fellow at the Manhattan Institute for Policy Research, where he has directed legal-policy research since 2003. Government decision-makers and business leaders alike regularly turn to Copland for advice. He has testified before Congress, state and municipal legislatures, and international bodies; he has spoken before multiple federal conferences, commissions, and agencies; and he has consulted with the Executive Office of the President. The U.S. Chamber of Commerce has awarded Copland's research on civil litigation, and the National Association of Corporate Directors has designated Copland to its "Directorship 100" list of the individuals most influential over U.S. corporate governance. Copland has authored many policy reports, multiple book chapters, and several articles in academic publications including the Harvard Business Law Review and Yale Journal on Regulation. He has also written scores of opinion columns in periodicals including The Wall Street Journal, The Washington Post, USA Today, and the National Law Journal. Leading national news outlets frequently cite Copland and his research, and he has made hundreds of media appearances in popular outlets such as PBS, Fox News, MSNBC, CNBC, Fox Business, Bloomberg, C-Span, and NPR. Outside his role at the Manhattan Institute, Copland has served on multiple corporate, public, and nonprofit boards. Earlier in his career, he was a management consultant with McKinsey and Company in New York and a law clerk for Ralph K. Winter on the U.S. Court of Appeals for the Second Circuit. Copland holds a J.D. and an M.B.A. from Yale; an M.Sc. in the politics of the world economy from the London School of Economics; and a B.A. in economics from the University of North Carolina at Chapel Hill, where he was a Morehead Scholar.