Finding My Pole Star: Memoir of an American hero's life of faithful military service and as an active business and community leader (Paperback) 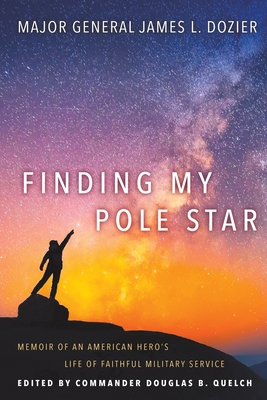 December 17, 2021, marks the 40th anniversary of the kidnapping of then Brigadier General James Lee Dozier in Verona, Italy by Red Brigade terrorists. Dozier was held captive for 42 days before being rescued by a special operations team -- a news story that made front-page headlines around the world. At the moment news of his rescue broke, everyone was asking: How did he manage to survive this?

The source of that resilience is the compelling story that unfolds in Finding My Pole Star, an inspiring message as timely today as it was four decades ago.

Major General James Lee Dozier retired from military service after serving 35 years with the U.S. Army and NATO in the United States, Europe and Asia. In his new memoir, Finding My Pole Star, this American hero recalls the traumatic kidnapping, his military leadership career, his civilian life as a successful business executive and his active community volunteerism. He inspires us with the timeless values that have guided his life of duty, honor, country and faith -- values that can help each of us as we thrive while facing our own fears.

"This book is a must-read account of a highly accomplished and effective leader in both military and community pursuits," Rear Admiral A. Scott Logan, U.S. Navy (retired) writes in endorsing the book. "It provides a road map for all individuals who desire to develop and pursue their own life-long Pole Star as their guiding light for an ethical, meaningful and successful life of service to God, community and all mankind."

Among the stories General Dozier tells in this book are his journey from a tiny high school and junior college eventually to the halls of West Point; his service in Vietnam with Col. George S. Patton III, the son of the famous World War II general; his appearance on the front cover of the inspirational magazine Guideposts; and his later-in-life career in agriculture as a citrus grower in Florida.

Through it all, General Dozier tells us, he was guided by his "pole star," a reference to the ability of mariners since ancient times to navigate using the stars in the heavens to guide them. "As it gave comfort to the mariner, it is also a directional pointer to one's life and ... represents ethics, morality, and religious values and beliefs," Dozier's friend and editor Commander Douglas B. Quelch, U.S. Navy (retired) writes in the book's opening pages.

In his endorsement of Finding My Pole Star, Admiral Logan concludes simply "This is a book for these times "