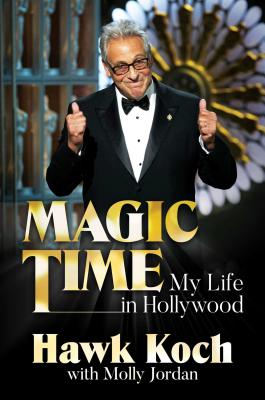 “Is there anybody that Hawk Koch hasn’t worked with? Magic Time should be required reading for three types of people. One, those starting in show business, two, those that have been in show business for a long time, and three, everyone else. Like every movie Hawk has made, Magic Time is a fascinating journey of self-identity. I love this book.”
—Mike Myers, Actor, Writer, and Director

“Magic Time recounts what I remember about Hawk: someone who never took an opportunity for granted and worked hard to achieve success in his own right. Plus, he was a lot of the fun, and, as the book reflects, we had some memorable adventures.”—Robert Redford, Oscar-winning Actor & Director, Founder of the Sundance Institute & Film Festival

“Hawk Koch is without a doubt one of the great Hollywood storytellers I’ve ever known. His adventures in the movie business are so funny and so incredible that I re-tell stories from his career more than ones from my own. And his own personal journey is as heartfelt as it gets.” —Edward Norton, Actor, Writer, and Director

“I can personally relate to this moving journey of a man learning to step out from under a father’s shadow. But Magic Time is also filled with fun, surprising stories that only a deep insider could tell.”—Jane Fonda, Oscar-winning Actress, Bestselling Author

“I found the book profoundly moving, and insightful about not only the entertainment industry, but human nature. Bravo and congratulations!”—Gale Anne Hurd, Producer, Terminator and The Walking Dead

“This book is more than just a great Hollywood memoir. Hawk Koch shares his story with us in a funny, touching, and vulnerable way in contrast to the glitz and glamor of the show business life he leads. If you want to hear a story about what Hollywood is really like read this book. It’s a winner.”—Mark Gordon, Producer of Saving Private Ryan, Grey’s Anatomy, and Criminal Minds

Hawk Koch is a veteran movie producer, involved with the making of more than sixty major films. As a former president of both the motion picture Academy and Producers Guild, Hawk serves on the board of Motion Picture & Television Fund, AMC Theatres, and Cast & Crew.

Molly Jordan is an author and Jungian Analyst. She sits on the board of Best Friends Animal Society. As the granddaughter of radio’s Fibber McGee & Molly, she is no stranger to the entertainment industry.

"Some of my best times on set were when I could ask a million questions about how the actors, directors, and craftspeople brought movies to life. I asked Hawk a zillion questions about him, but they were really about his dad. This was before I learned a lesson from my daughter, who bitched to me once...or 100 times. 'No one ever asks me a question about me, they only want to know about you.' Later on, I was lucky enough to meet Hawk's dad. The pride of father to son, was always evident. In Magic Time, there's no mistaking it—Howard Koch and Hawk Koch are great reflections of each other. What's better than that?"
— Whoopi Goldberg, EGOT-winner, Actor, Host

"Magic Time is a wonderful, charming, heartbreaking, inspiring, redemptive story beautifully told. I am touched by it on so many levels, and Hawk's love of movies is infectious. Hawk is the guy that got us the p.g.a. mark, and the animation producers the Oscar. He is the most dynamic, productive and successful Academy leader I've seen in my lifetime. So, thanks, Hawk, for all you have done for us, for movies, and for the gift of this book."
— Jim Morris, President of Pixar Animation Studios

"Hawk Koch's climb up the proverbial ladder of success is by no means a mistake: not opting to be a dilettante, which he very well could have been, he did his homework, excelling in every facet...from the lowest up to the highest in the making of a film. Most every filmmaker of substance, including myself, have wanted Hawk to be on their team. Selfishly, not altruistically, we know what Hawk brings to the party. His multitude of extraordinary incidents, make for an inspirational, sometimes hilarious, behind-the-scenes, never told, exciting read. His singular insight will give any reader interested in flicks a shot of adrenaline. His retelling of his incredulous experiences makes for a book to read and read again."
— Robert Evans, Producer and Bestselling Author of "The Kid Stays in the Picture"

"On one level, Hawk Koch has written a memoir on a life in Hollywood that will fascinate, inform and amuse you. His point of view is as close to ground zero as there is. On another level he has written an honest reflection on what it means to be a human being, on the long journey from the head to the heart. The skin of his tale describes America's dreams from post-WW II to now and the folks who made those dreams that shaped us. The bones are as old as Odysseus."
— David Field, Writer, Producer, and Former Studio Executive

"Not only is it a terrific movie book but, Hawk unveils the personal difficulties of being the namesake of a very famous father and the nerve-wracking ups and downs of life in Hollywood. A lively read of contemporary movie making from a key player."
— Sid Ganis, Producer, Former President of the Academy of Motion Picture Arts and Sciences

"Hawk Koch worked is way up from a location manager, to a 1st AD, to line producer, and then a full producer. He also ran a major production company. Hawk knows from the inside how to truly produce a movie. This book will give you great insight and offer the secrets and skills of how to work with actors, writers, cinematographers, and especially directors. Hawk's complete knowledge about filmmaking makes this a must read for any producer."
— Gary Lucchesi, Producer, President of Lakeshore Entertainment

"An exceptional story from an exceptional individual! Hawk has risen through the ranks of Hollywood on his own creative talent, intelligence, and hard work. Although born into this business, he never took it for granted. He learned the craft of filmmaking and takes us along for that ride. How wonderful to have the opportunity as a reader to sit by his side and have a view into the behind-the-scenes of movie making! A must read!"
— Ruth Vitale, Producer, CEO of Creative Future

"Hawk brought a special type of leadership to the Academy while he was President because he viewed the film community as one, all equally important in the collective effort of getting a movie made. One of his greatest talents is making work fun. Optimistic, energetic, he moved the Academy forward while never losing sight of his first love: the movies and the people who make them. He gives readers an inspired and honest view of filmmaking and our filmmaking community."
— Dawn Hudson, CEO of the Academy of Motion Picture Arts and Sciences