Constant Comedy: How I Started Comedy Central and Lost My Sense of Humor (Hardcover) 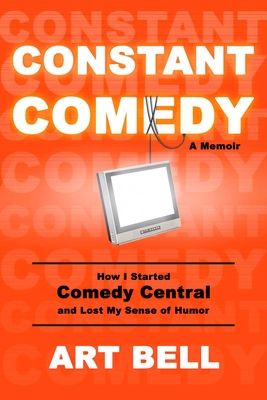 In 1988, a young, mid-level employee named Art Bell pitched a novel concept—a television channel focused 100% on just one thing: comedy—to the chairman of HBO. The station that would soon become Comedy Central, with celebrated programs like South Park, Chapelle’s Show, The Daily Show, and The Colbert Report, was born.

Constant Comedy takes readers behind the scenes into the comedy startup on its way to becoming one of the most successful and creative purveyors of popular culture in the United States. From disastrous pitch meetings with comedians to the discovery of talents like Bill Maher and Jon Stewart, this intimate biography peers behind the curtain and reveals what it’s really like to work, struggle, and ultimately succeed at the cutting edge of show business.

Art Bell is a former media executive best known for creating and building HBO's The Comedy Channel, which went on to become Comedy Central. After Comedy Central, Bell became the president of Court TV and was the guiding force behind one of the most successful brand evolutions in cable television. Bell is the author of Web Sightings: A Collection of Websites We'd Like to See. He lives with his family in Connecticut.

“As comedy writers know, the rarest of all creatures is the comedy exec who's actually funny. Art Bell is funny as hell, he understands comedy, and that’s why Comedy Central was born and why it thrived. Constant Comedy is a great, fun read.”
— Michael Weithorn, Creator and Executive Producer of "The King of Queens"

"Buy this book. Right now. Don't even finish reading this blurb. Just walk to the counter and buy the book. Constant Comedy is the funniest behind-the-scenes memoir I’ve ever read, full of crazy characters, plot twists, and suspense. It's the story of how Art Bell built Comedy Central into one of cable TV's most successful channels, which meant dealing with insane comedians and even more insane TV executives in a rough-and-tumble workplace. Somehow he made it all work. Did I mention that this book is funny?"
— Dan Lyons, New York Times bestselling author of DISRUPTED

"Constant Comedy is an incredibly fun read about the art of silliness struggling to survive in the corporate world; or is it about a corporation struggling to survive in a world of silliness? Either way, it’s a very, very funny book about an amazing piece of comedy history. Now stop reading the blurbs and buy the book! “
— Jerry Zucker, co-writer and director of "Airplane!", co-writer of "The Naked Gun" and director of "Ghost"