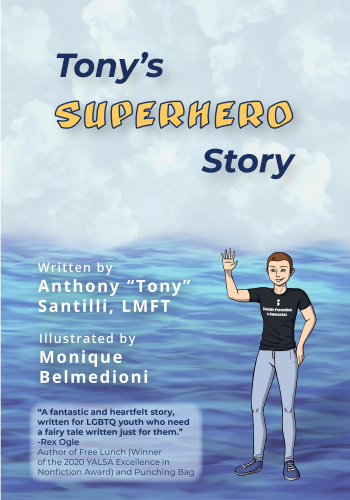 In Tony’s youth, he loved to swim with dolphins and fantasized about visiting a magical place called the Water Kingdom in the deep waters of the ocean. The dolphins taught Tony the martial art of waterbending that allowed him to control and bend water. Tony’s passion for dolphins, waterbending and the Water Kingdom continued into his teen years. Even though Tony was a talented waterbender, he felt confused about his identity, specifically as a gay teenager. Tony was targeted by a bully for being gay. Due to his insecurities, the traumas of being bullied and his inability to heal, Tony succumbed to depression and despair. Tony attempted suicide by drowning. He survived his drowning attempt, but lost his ability to waterbend. At his lowest point, Tony sought support from a Magical Healer who helped him heal. Newly empowered, Tony began his superhero quest, using water magic to reignite his passion for dolphins and to find the Water Kingdom. Will Tony be able to use his water magic to swim again with the dolphins and visit the Water Kingdom?

Anthony “Tony” Santilli was born in Mountain View, California, and raised in Los Gatos, California. While studying at Oregon State University for his Bachelor of Arts degree in Psychology and a minor in Spanish, he studied abroad in Buenos Aires, Argentina. Later, he was accepted as an intern to teach English in Nepal for an organization called Trek to Teach. Upon conferral of his degree in 2015, Tony began to volunteer for the National Suicide and Crisis hotline while supporting children and adolescents with Autism. Over the course of the following two years, he pursued and completed his Master of Arts degree in Counseling Psychology at The Wright Institute in Berkeley. After graduating in 2018, Tony worked primarily with youth at schools and a clinic where he delved deeper into play therapy. Tony became a licensed Marriage and Family Therapist in May 2021.

Tony is vocal about the social injustices experienced by marginalized communities and works toward further developing himself as an antiracist and an intersectional feminist. He is a proud member of the LGBTQIA+ community. Tony strives to normalize discussions about mental health and to secure accessible mental health services for everyone. He models this among family and friends, through social media and on psychotherapy sites.

“A fantastic and heartfelt story, written for LGBTQ youth who need a fairy tale written just for them.” -Rex Ogle, Author of Free Lunch (Winner of the 2020 YALSA Excellence in Nonfiction Award) and Punching Bag.