Honky in the House: Writing & Producing The Jeffersons (Paperback) 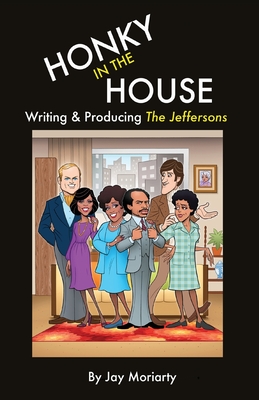 "Jay Moriarty's Honky in the House is a fascinating look into the inner workings of The Jeffersons, one of the most successful and groundbreaking TV series of all time. The book provides an insightful examination of how The Jeffersons dealt with and helped mold the country's awakening to crucial social and racial issues. It's also a compelling story of personal success, and the capper is that it's all written with Jay's inimitable sense of humor." Hollywood Journal

In this witty, very personal and unapologetic account of breaking into the entertainment business, Jay Moriarty serves up a master class in the essentials of writing and producing a TV series. Moriarty was able to realize his Hollywood dream of writing relevant comedy at a time of national upheaval-movin' on up with The Jeffersons, first as a writer, then as Executive Producer. Honky in the House introduces us to some of the leading minds in television comedy, including Norman Lear, the first TV producer to successfully combine humor with biting social satire. The book is also a reflection on the issues The Jeffersons dared to confront, including interracial marriage, suicide, transgender identity, and even the KKK.

"Takes us behind the scenes in the Golden Age of Sitcoms." Spotlight Press

"A unique peek at what it's like to be a staff writer on a classic TV series." Entertainment Press

"With this book, the author has created an intriguing genre-a hybrid, rather, a tri-brid-a combination of Memoir, Novel and How To book (on writing for TV)." Atlantic Oracle