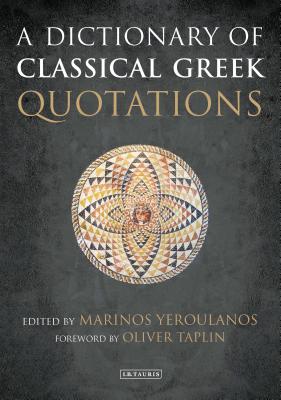 A 2016 Book of the Year, BBC History Magazine

Human wisdom is of little or no value', wrote Plato in his Apology. And yet the ancient Greeks, including Plato himself, more than any other people of antiquity were fascinated by the pursuit of the wisdom they called philosophia. That search for knowledge involved an extensive use of maxims and quotations, as we can see from those expressions of Homer prefaced by the phrase 'as people say'. Homer, the Seven Sages and the Pre-Socratic philosophers are still extensively quoted in all the major western languages. Yet for all their popularity, until now there has been no single resource to which interested readers might turn. This unique reference book offers one of the most comprehensive selections of Greek quotations ever committed to print. With its English text matched by the original Greek, the volume collects 7500 entries, ranging from the archaic period to late antiquity, and across philosophy, drama, poetry, history, science and medicine, each indexed with key words to enable fast sourcing. Together, these selections provide an incomparable insight into the glories of Greek civilization.

Marinos Yeroulanos is a member of UNESCO's National Committee and a past President of the Benaki Museum in Athens, where he lives. He specialises in the study of ancient Greek literature and other aspects of the culture of antiquity. He has also led a distinguished career in business and public life.