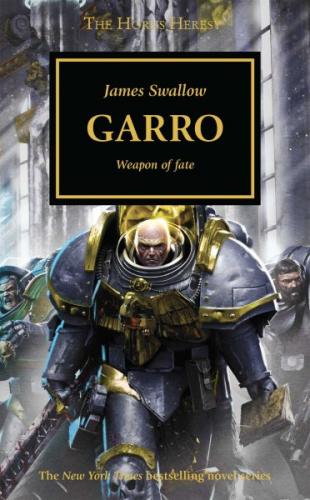 This is book number 42 in the The Horus Heresy series.

Battle-Captain. Knight Errant. Agentia Primus. Hero. Nathaniel Garro's journey through the Horus Heresy has been long and hard - this is his story.

From out of the shadows of the Silent War, a new hero emerges. Clad all in grey, an errant warrior of the Legiones Astartes kneels before the Regent of Terra and accepts a solemn new duty – Battle-Captain Garro, once commander of the Eisenstein, is now Agentia Primus of Malcador the Sigillite. From the desolation of Isstvan to the halls of the Imperial Palace itself, Garro stands as a paragon of loyalty and protector of the innocent, ever ready to strike back at the traitorous allies of the Warmaster. But he is walking a dangerous path of his own, one that may lead him to question his place in the Imperium... and what if he, too, should falter?

James Swallow is the author of the Horus Heresy novels Fear to Tread and Nemesis, which both reached the New York Times bestseller lists. Also for the Horus Heresy, he has written The Flight of the Eisenstein, The Buried Dagger and a series of audio dramas featuring the character Nathaniel Garro, the prose versions of which have now been collected into the anthology Garro. For Warhammer 40,000, he is best known for his four Blood Angels novels, the audio drama Heart of Rage, and his two Sisters of Battle novels. His short fiction has appeared in Legends of the Space Marines and Tales of Heresy.