The Burden of Loyalty (The Horus Heresy #48) (Paperback) 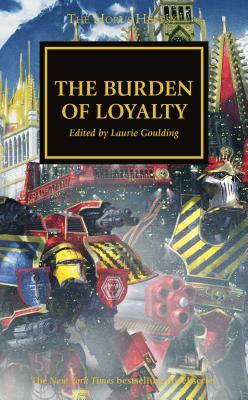 This is book number 48 in the The Horus Heresy series.

As the darkness of the war slowly consumes the galaxy, those who still serve the Throne are faced with a struggle for their survival and the continued existence of everything they hold dear. With the threat of the Warmaster's fleet looming ever closer to Terra, if will fall to such heroes to halt the tide, but the enemies arrayed against them are powerful and the burden of loyalty is great...

This Horus Heresy anthology contains six short stories, some of which are in print for the first time or originally released as audio dramas, by authors such as Dan Abnett, Aaron Dembski-Bowden, Gav Thorpe and John French. Also included are the novellas Wolf King, by Chris Wraight, and Cybernetica, by Rob Sanders.

Dan Abnett has written over fifty novels, including Anarch, the latest instalment in the acclaimed Gaunt’s Ghosts series. He has also written the Ravenor and Eisenhorn books, the most recent of which is The Magos. For the Horus Heresy, he is the author of Horus Rising, Legion, The Unremembered Empire, Know No Fear and Prospero Burns, the last two of which were both New York Times bestsellers. He also script ed Macragge’s Honour, the first Horus Heresy graphic novel, as well as numerous audio dramas and short stories set in the Warhammer 40,000 and Warhammer universes. He lives and works in Maidstone, Kent.

Aaron Dembski-Bowden is the author of the Horus Heresy novels The Master of Mankind, Betrayer and The First Heretic, as well as the novella Aurelian and the audio drama Butcher’s Nails, for the same series. He has also written the Warhammer 40,000 novel Spear of the Emperor, the popular Night Lords series, the Space Marine Battles book Armageddon, the novels The Talon of Horus and Black Legion, the Grey Knights novel The Emperor’s Gift and numerous short stories. He lives and works in Northern Ireland.

Rob Sanders is the author of the Horus Heresy novellas Cybernetica and The Serpent Beneath, the latter of which appeared in the New York Times bestselling anthology The Primarchs. His other Black Library credits include the The Beast Arises novels Predator, Prey and Shadow of Ullanor, the Warhammer 40,000 titles Sons of the Hydra, Skitarius, Tech-Priest, Legion of the Damned, Atlas Infernal and Redemption Corps and the audio drama The Path Forsaken. He has also written the Warhammer Archaon duology, Everchosen and Lord of Chaos, along with many short stories for the Horus Heresy and Warhammer 40,000. He lives in the city of Lincoln, UK.

John French is the author of several Horus Heresy stories including the novels The Solar War, Praetorian of Dorn, Tallarn and Slaves to Darkness, the novella The Crimson Fist, and the audio dramas Dark Compliance, Templar and Warmaster. For Warhammer 40,000 he has written Resurrection, Incarnation and Divination for The Horusian Wars and three tie-in audio dramas – the Scribe award-winning Agent of the Throne: Blood and Lies, as well as Agent of the Throne: Truth and Dreams and Agent of the Throne: Ashes and Oaths. John has also written the Ahriman series and many short stories.

L J Goulding is the author of the Horus Heresy audio drama The Heart of the Pharos, while for Space Marine Battles he has written the novel Slaughter at Giant's Coffin and the audio drama Mortarion's Heart. His other Warhammer fiction includes 'The Great Maw' and 'Kaldor Draigo: Knight of Titan', and he has continued to explore the dark legacy of Sotha in 'The Aegidan Oath' and Scythes of the Emperor: Daedalus. He lives and works in the US.

Chris Wraight is the author of the Horus Heresy novels Warhawk, Scars and The Path of Heaven, the Primarchs novels Leman Russ: The Great Wolf and Jaghatai Khan: Warhawk of Chogoris, the novellas Brotherhood of the Storm, Wolf King and Valdor: Birth of the Imperium, and the audio drama The Sigillite. For Warhammer 40,000 he has written The Helwinter Gate, The Lords of Silence, Vaults of Terra: The Carrion Throne, Vaults of Terra: The Hollow Mountain, Watchers of the Throne: The Emperor’s Legion, Watchers of the Throne: The Regent’s Shadow and many more. Additionally, he has many Warhammer novels to his name, and the Warhammer Crime novel Bloodlines. Chris lives and works in Bradford-on-Avon, in south-west England.

David Annandale is the author of the Warhammer Horror novel The House of Night and Chain and the novella The Faith and the Flesh, which features in the portmanteau The Wicked and the Damned. His work for the Horus Heresy series includes the novels Ruinstorm and The Damnation of Pythos, and the Primarchs novels Roboute Guilliman: Lord of Ultramar and Vulkan: Lord of Drakes. For Warhammer 40,000 he has written Warlord: Fury of the God-Machine, the Yarrick series, and several stories involving the Grey Knights, as well as titles for The Beast Arises and the Space Marine Battles series. For Warhammer Age of Sigmar he has written Neferata: Mortarch of Blood and Neferata: The Dominion of Bones. David lectures at a Canadian university, on subjects ranging from English literature to horror films and video games.