Sagas of the Space Wolves: The Omnibus (Warhammer 40,000) (Paperback) 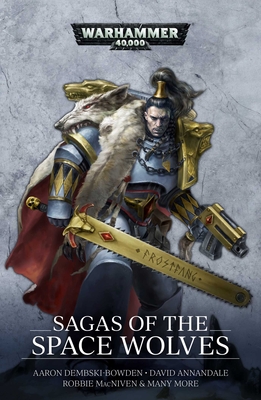 Bumper Omnibus collecting together some of Black Library's most loved Space Wolves stories for the first time.

Born on the icy world of Fenris, few amongst the brotherhoods of the Adeptus Astartes are as fierce or as noble as the Space Wolves. Long are their tales, told around mead halls or the flickering glow of a hungry fire. Heed them well, for they speak of legends like the Young King Ragnar Blackmane, whose thirst for battle is only matched by his heroism, or the Wolf Lord Logan Grimnar that most venerable and fearsome of warriors, he who leads the Chapter itself. So listen hard and listen carefully to the skald as he holds forth around the burning fire, because there is darkness in these sagas as well as light.

This omnibus edition collects together for the first time the novels Ragnar Blackmane, Curse of the Wulfen, Legacy of Russ and The Hunt for Logan Grimnar as well as the novellas Blood on the Mountain and Arjac Rockfist, and a host of short stories.

Aaron Dembski-Bowden is the author of the Horus Heresy novels The Master of Mankind, Betrayer and The First Heretic, as well as the novella Aurelian and the audio drama Butcher’s Nails, for the same series. He has also written the Warhammer 40,000 novel Spear of the Emperor, the popular Night Lords series, the Space Marine Battles book Armageddon, the novels The Talon of Horus and Black Legion, the Grey Knights novel The Emperor’s Gift and numerous short stories. He lives and works in Northern Ireland.

David Annandale is the author of the Warhammer Horror novel The House of Night and Chain and the novella The Faith and the Flesh, which features in the portmanteau The Wicked and the Damned. His work for the Horus Heresy series includes the novels Ruinstorm and The Damnation of Pythos, and the Primarchs novels Roboute Guilliman: Lord of Ultramar and Vulkan: Lord of Drakes. For Warhammer 40,000 he has written Warlord: Fury of the God-Machine, the Yarrick series, and several stories involving the Grey Knights, as well as titles for The Beast Arises and the Space Marine Battles series. For Warhammer Age of Sigmar he has written Neferata: Mortarch of Blood and Neferata: The Dominion of Bones. David lectures at a Canadian university, on subjects ranging from English literature to horror films and video games.

Robbie MacNiven is a Highlands-born History graduate from the University of Edinburgh. He has written the Warhammer Age of Sigmar novel Scourge of Fate and Gotrek Gurnisson novella The Bone Desert, as well as the Warhammer 40,000 novels Blood of Iax, The Last Hunt, Carcharodons: Red Tithe, Carcharodons: Outer Dark and Legacy of Russ. His short stories include ‘Redblade’, ‘A Song for the Lost’ and ‘Blood and Iron’. His hobbies include re-enacting, football and obsessing over Warhammer 40,000.

Ben Counter has two Horus Heresy novels to his name – Galaxy in Flames and Battle for the Abyss. He is the author of the Soul Drinkers series and The Grey Knights Omnibus. For Space Marine Battles, he has written The World Engine and Malodrax, and has turned his attention to the Space Wolves with the novella Arjac Rockfist: Anvil of Fenris as well as a number of short stories. He is a fanatical painter of miniatures, a pursuit that has won him his most prized possession: a prestigious Golden Demon award. He lives in Portsmouth, England.

Nick Kyme is the author of the Horus Heresy novels Old Earth, Deathfire, Vulkan Lives and Sons of the Forge, the novellas Promethean Sun and Scorched Earth, and the audio dramas Red-Marked, Censure and Nightfane. His novella Feat of Iron was a New York Times bestseller in the Horus Heresy collection, The Primarchs. Nick is well known for his popular Salamanders novels, including Rebirth, the Sicarius novels Damnos and Knights of Macragge, and numerous short stories. He has also written fiction set in the world of Warhammer, most notably the Warhammer Chronicles novel The Great Betrayal and the Age of Sigmar story ‘Borne by the Storm’, included in the novel War Storm. More recently he has scripted the Age of Sigmar audio drama The Imprecations of Daemons. He lives and works in Nottingham.

Andy Smillie is best known for his visceral Flesh Tearers novellas, Sons of Wrath and Flesh of Cretacia, and the novel Trial by Blood. He has also written a host of short stories starring this brutal Chapter of Space Marines and a number of audio dramas including and The Kauyon, Blood in the Machine, Deathwolf, From the Blood, Hunger and The Assassination of Gabriel Seth.

Cavan Scott has written for such popular franchises as Star Wars, Doctor Who, Judge Dredd, LEGO DC Super Heroes, Penguins of Madagascar, Adventure Time and many, many more. The writer of a number of novellas and short stories set within the Warhammer 40,000 universe, including the Warhammer Adventures: Warped Galaxies series, Cavan became a UK number one bestseller with his 2016 World Book Day title, Star Wars: Adventures in Wild Space ­– The Escape. Find him online at www.cavanscott.com

Mark Clapham was born and raised in Yorkshire, studied and worked in London for over a decade, and is now an itinerant writer and editor based in Exeter, Devon. His short stories have appeared in the Fear the Alien anthology and the monthly magazine Hammer and Bolter. Iron Guard is his first novel for Black Library.

Alec Worley is a well-known comics and science fiction and fantasy author, with numerous publications to his name. He is an avid fan of Warhammer 40,000 and has written many short stories for Black Library including ‘Stormseeker’, ‘Whispers’ and ‘Repentia’. He has recently forayed into Black Library Horror with the audio drama Perdition's Flame and his novella The Nothings, featured in the anthology Maledictions. He lives and works in London.