The Philosophy of Modern Song (CD-Audio) 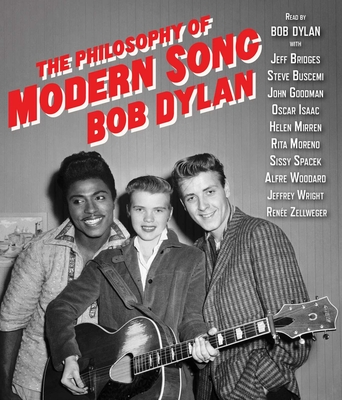 By Bob Dylan, Bob Dylan (Read by), Jeff Bridges (With), Steve Buscemi (With), John Goodman (With), Oscar Isaac (With), Helen Mirren (With), Rita Moreno (With), Sissy Spacek (With), Alfre Woodard (With), Jeffrey Wright (With), Renée Zellweger (With)
$34.99

Dylan, who began working on the book in 2010, offers his extraordinary insight into the nature of popular music. He writes over sixty essays focusing on songs by other artists, spanning from Stephen Foster to Elvis Costello, and in between ranging from Hank Williams to Nina Simone. He analyzes what he calls the trap of easy rhymes, breaks down how the addition of a single syllable can diminish a song, and even explains how bluegrass relates to heavy metal. These essays are written in Dylan’s unique prose. They are mysterious and mercurial, poignant and profound, and often laugh-out-loud funny. And while they are ostensibly about music, they are really meditations and reflections on the human condition. Running throughout the book are a series of dream-like riffs that, taken together, resemble an epic poem and add to the work’s transcendence.

In 2020, with the release of his outstanding album Rough and Rowdy Ways, Dylan became the first artist to have an album hit the Billboard Top 40 in each decade since the 1960s. The Philosophy of Modern Song contains much of what he has learned about his craft in all those years, and like everything that Dylan does, it is a momentous artistic achievement.

Helen Mirren, born Helen Mironov of Russian-English parentage, is one of
the best-known and most-respected actresses in Britain and America. In a career
that spans stage, screen and television, she has become renowned for tackling
challenging roles and has won many awards for her powerful and versatile
performances.

She began her career with the National Youth Theatre in 1965 in a performance
that resulted in her discovery. Two years later she was invited to join the
Royal Shakespeare Company and starred in a number of highly regarded
productions. In 1972 she joined renowned director Peter Brook's Theatre Company
and toured the world.

Her film career began in the late 1960s with Michael Powell's Age of
Consent, but her breakthrough role was in John Mackenzie's The Long Good
Friday. Her performance saw critics hailing a major new screen star. She
earned her first Academy Award nomination for her performance in The Madness
of King George and her second for her role in Gosford Park. She was
nominated for a Golden Globe for Calendar Girls. Her most recent and
celebrated role was as Elizabeth II in The Queen, for which she won a
Golden Globe, a BAFTA and an Academy Award as Best Actress.

In the early 1990s, Helen starred in the Emmy and BAFTA award-winning television
series Prime Suspect, in which she starred as Detective Chief Inspector
Jane Tennison. The final Prime Suspect was released in 2006, bringing
this iconic role to its conclusion, and she was nominated for a Golden Globe for
Best Actress. Her television roles have won her a string of awards, most
recently in 2006, for her performance as Elizabeth I, for which she won a Golden
Globe and an Emmy for Best Actress.

Helen Mirren is married to the American film director Taylor Hackford. She
became a Dame of the British Empire in 2003.

"This momentous work takes listeners deep inside the emotional narratives and cultural ethos behind 60 pop songs created over the past seven decades. Dylan’s narration is quick and occasionally indistinct — a by-product of his intensity and in-the-moment engagement. It’s a moving experience to hear this musical and literary giant deliver his takes on these iconic songs. His artistic and social sensibilities are in high gear, and the other remarkable cast members all narrate with equal engagement and charisma. They capture what Dylan says about each song, its cultural context, and the life of the writer(s) and artist(s) who wrote and/or performed it. Almost as one voice, the narrators create a flow of energy that adds immeasurably to the impact of Dylan’s poetic writing."
— Winner of an AudioFile Earphones Award, AudioFile Magazine