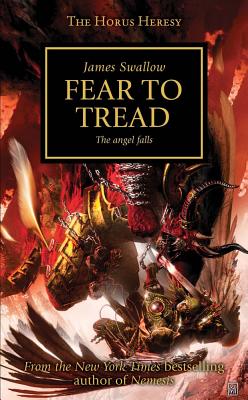 This is book number 21 in the Horus Heresy series.

There is war on Signus Prime; Horus sends the Blood Angels to the Signus system, where an army of Khornate daemons waits for them. The Warmaster’s plan is to use the flaw in the Blood Angels’ gene-seed – which will later be known as the Red Thirst – to turn them to the worship of the Blood God. At the height of the battle, Sanguinius fights with the Bloodthirster Ka’Bandha.  The Blood Angels fight for survival of thier minds and bodies

James Swallow is a New York Times and Sunday Times (UK) bestselling author, BAFTA-nominated screenwriter, and the only British writer to have worked on a Star Trek television series. His Star Trek fiction includes The Latter Fire, Sight Unseen, The Poisoned Chalice, Cast No Shadow, Synthesis, Day of the Vipers, The Stuff of Dreams, Infinity’s Prism: Seeds of Dissent, and short stories in Seven Deadly Sins, Shards and Shadows, The Sky’s the Lim­it, and Distant Shores. His other works include the Marc Dane thriller series and tales from the worlds of 24, Doctor Who, Star Wars, Halo, Warhammer 40,000, and more. He lives and works in London.