The Flight of the Eisenstein (The Horus Heresy #4) (Paperback) 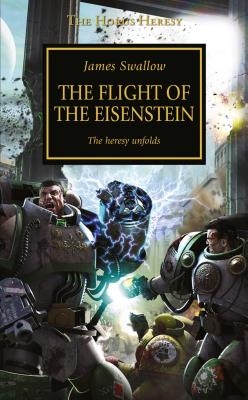 This is book number 4 in the The Horus Heresy series.

Having witnessed the events on Istvaan III, Deathguard Captain Garro seizes a ship and heads to Terra to warn the Emperor of Horus' treachery. But the fleeing Eisenstein is damaged by enemy fire, and becomes stranded in the warp. Can Garro and his men survive the depredations of Chaos and get his warning to Terra in time? This is a reissue of 9781849708128.

James Swallow is the author of the Horus Heresy novels Fear to Tread and Nemesis, which both reached the New York Times bestseller lists. Also for the Horus Heresy, he has written The Flight of the Eisenstein, The Buried Dagger and a series of audio dramas featuring the character Nathaniel Garro, the prose versions of which have now been collected into the anthology Garro. For Warhammer 40,000, he is best known for his four Blood Angels novels, the audio drama Heart of Rage, and his two Sisters of Battle novels. His short fiction has appeared in Legends of the Space Marines and Tales of Heresy.