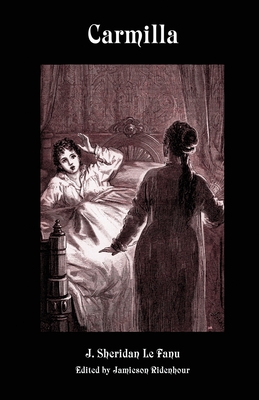 "This classic gothic novella is one that definitely deserves more attention. Not only did it inspire Dracula, but the whole of vampire lore. It also features two female main characters who are positively infatuated with each other.

recommended if you like: Gothic lit, queer women longing for each other"

Following a near fatal carriage collision, the beautiful young Carmilla is taken in by the narrator Laura and her father. The two young women become strangely attracted to each other, but there seems to be more to Carmilla than meets the eye. After her arrival in the village, local peasants begin to die and Laura falls ill and languishes. What is Carmilla's true identity, and can she be to blame?

A thrilling Victorian tale of horror and mystery and a major influence on Stoker's Dracula, Carmilla remains one of Sheridan Le Fanu's most enduring works. This Valancourt Books edition, the first-ever scholarly edition of Le Fanu's novella, follows the rare original text as it appeared serially in The Dark Blue in 1871-72 (including the original illustrations) and includes a new introduction and footnotes by Jamieson Ridenhour. Also featured in this edition is a wealth of contextual material, including texts by Yeats, Coleridge, Stoker, Padraig Pearse, and others, and the complete texts of Le Fanu's "The Child that Went with the Fairies" and F.G. Loring's "The Tomb of Sarah.