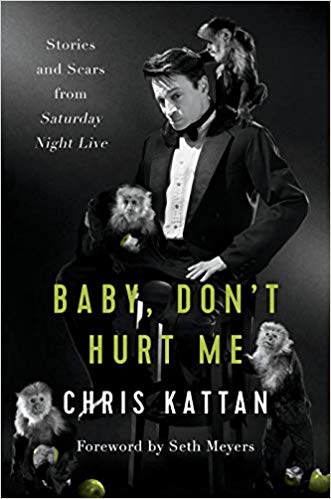 You may know him as Mango, Mr. Peepers, the gibberish-spouting Suel Forrester, or one half of the head-bopping brothers in A Night at the Roxbury. Maybe you remember him as the forlorn gothic kid Azrael Abyss, Gay Hitler, or the guitarist in the "More Cowbell" sketch. Whichever it is, Chris Kattan has earned a spot in the hearts of a generation of comedy fans.

Chris Kattan has defied comparison, expectations, and sometimes gravity with his inimitable style of physical comedy. By creating some of the most memorable Saturday Night Live characters, as well as his many roles in film and television, Kattan has remained one of the most fearless and versatile comedians in the world.

Not long after Chris was labeled one of the improv group Groundlings' "must-see" performers in the company, he was cast on SNL--and within the first six weeks, Chris's film career also took off.

Now, for the first time, Kattan opens up about eight seasons on SNL, performing alongside friends and future legends including Will Ferrell, Jimmy Fallon, and Tina Fey, and guest hosts from Charlize Theron to Tom Hanks to David Bowie. He also shares stories of his unusual childhood (involving a secluded mountain with zen monks) with Leonard Cohen and Alan Watts. Baby, Don't Hurt Me offers an unprecedented look into Chris's life, from his fascinating relationship with Lorne Michaels, a private Valentine's Day dinner with Tom Cruise and Katie Holmes, an unforgettable flight with Beyonc , and even breaking his neck on live television.

Baby, Don't Hurt Me is a candid, revealing memoir from a timeless comedian and a window into the world of millennium-era SNL, from the rehearsals to the after-after parties, as narrated by your hilarious and inspiring friend--who just so happened to be there for all of it.

Chris Kattan began his comedic career as a member of several improv/sketch comedy troupes, including The Groundlings in Los Angeles. His father was an original member of the troupe. Kattan also did some minor roles on TV, including an episode of NewsRadio. He moved to New York City to work on Saturday Night Live from 1995 to 2003. His recurring characters included Mr. Peepers, Mango, Azrael Abyss, Kyle DeMarco from The DeMarco Brothers, Gay Hitler, Suel Forrester (known for the term "dagitybo") and, most notably, one half of the Butabi Brothers with fellow SNL (and Groundlings) cast member Will Ferrell, known for their trademark head-bobbing. Kattan and Ferrell continued the characters in 1998's A Night at the Roxbury. Kattan has made one appearance on Broadway, playing Xanthias in a production of Aristophanes' The Frogs. Kattan appeared in a Diet Pepsi MAX commercial during Super Bowl XLII that featured the song "What Is Love" and had many actors in the commercial performing the Butabi head bob. In August 2009, Kattan starred in the IFC miniseries Bollywood Hero, where he portrays himself and the difficulties he faces after a career as a comic actor, trying to attain leading man status. Starting in fall of 2009, Kattan appeared in a supporting role in The Middle. He also appeared in an episode of How I Met Your Mother as a star in a fictional movie within the show. In December 2011, Kattan made a guest appearance on Saturday Night Live's Christmas show, hosted by Jimmy Fallon. Bestselling author Travis Thrasher has written over 45 books, from love stories to supernatural thrillers. His inspirational stories have included collaborations with filmmakers, musicians, athletes, and pastors. He's also written memoirs and self-help books. His novelizations include Do You Believe? and God's Not Dead 2. Upcoming projects he is working on include Olympic Pride, American Prejudice, about the lives of the other 17 American black athletes who competed in the 1936 Olympic Games in Berlin. Travis lives with his wife and three daughters in a suburb of Chicago, and fittingly enough, will have a children's book titled Brave Girls Confidential released later in 2017.