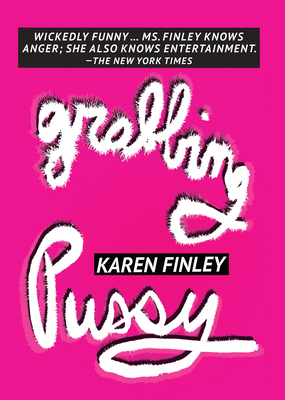 Based on her widely praised performance piece Unicorn Gratitude Mystery (Wickedly funny, as described by The New York Times), Karen Finley's Grabbing Pussy explores the Shakespearean dynamics that surface when libidos and loyalties clash in the public and private personas of Donald Trump, Hillary and Bill Clinton, Huma Abedin and Anthony Weiner, and now Harvey Weinstein.

Standing in the tradition of Allen Ginsberg's Howl, Finley's words jolt the reader into new insights about the ways the darkly private can drive the public realm in dizzying twists and turns. The aggression of intimacy, the disparity of gender, and the vital importance of hair are all encompassed in Finley's exhilarating canter.

KAREN FINLEY is a performance artist whose work has long provoked controversy and debate. She has performed at the Lincoln Center (NYC), the ICA (London), the Steppenwolf (Chicago), and the Bobino (Paris). Her art is widely collected, including by Centre Pompidou in Paris and the Museum of Contemporary Art in Los Angeles. She has received numerous awards, including a Guggenheim Fellowship, two Obies, two Bessies, and a Ms. magazine Woman of the Year Award. Her previous books include Shock Treatment, Enough is Enough, Living It Up, A Different Kind Of Intimacy, George and Martha, and The Reality Shows. Finley is a professor in the department of Art and Public Policy at Tisch School of the Arts, New York University.