Wading in Waist-High Water: The Lyrics of Fleet Foxes (Hardcover) 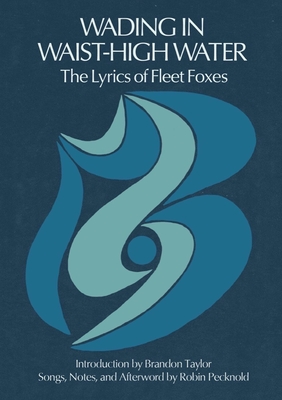 Featured in The New Yorker and Rolling Stone

As Recommended in the Buzzfeed Holiday Gift Guide

“There is something quite moving about seeing these fifty-five songs collected and assembled this way. Themes of family, friendship, love, destiny, loss, nature, and honest living bridge all of the albums and form the core set of concerns of this body of work. At the same time, you can see the evolution of the minds and hearts at work behind the lyrics.” —Brandon Taylor

Since the release of their breakout debut album in 2008, Fleet Foxes and their front man, singer-songwriter Robin Pecknold, have enjoyed international critical and commercial acclaim. Their music has helped reshape the American indie-folk sound through songs that are acoustically and melodically driven, steeped in gospel-like harmonies, and propelled by Pecknold’s resonant, earthy, and timeless lyrics.

Wading in Waist-High Water: The Lyrics of Fleet Foxes contains Pecknold’s complete lyrics from fifty-five songs, capturing the poetic and inventive storytelling that is a hallmark of the band’s music. These richly layered lyrics explore the complexity, darkness, and beauty of physical and emotional landscapes, both pastoral and modern. Accompanying the lyrics, Pecknold includes notes on his creative processes, inspirations, and motivations.

With an introduction by celebrated novelist Brandon Taylor, and an afterword by Pecknold, Wading in Waist-High Water is a moving and intimate look at the art of songwriting, the joy of music-making, and what it means to produce meaningful and memorable sound.

Robin Pecknold is an American singer-songwriter best known as the principal songwriter and vocalist for Fleet Foxes, with whom he has recorded four studio albums: Fleet Foxes (2008), Helplessness Blues (2011), Crack-Up (2017), and Shore (2020). He has been nominated for many awards, including a Grammy for Best Folk Album and for Best Alternative Music Album, and has won numerous international awards. He was born in Seattle, Washington, and lives in New York, New York.

Brandon Taylor is the author of Real Life, which was shortlisted for the Booker Prize, longlisted for the Center for Fiction First Novel Prize, and named a New York Times Book Review Editors’ Choice, and of the national bestseller Filthy Animals, for which he won The Story Prize and was shortlisted for the Dylan Thomas Prize. He holds graduate degrees from the University of Wisconsin-Madison and the University of Iowa, where he was an Iowa Arts Fellow at the Iowa Writers' Workshop in fiction.

Distills the music down to its emotional core.
— BuzzFeed

Serves as a footnoted guide to the band’s catalog.
— Vulture

A perfect gift for Fleet Foxes fans or lovers of the craft of indie folk songwriting.
— Consequence of Sound