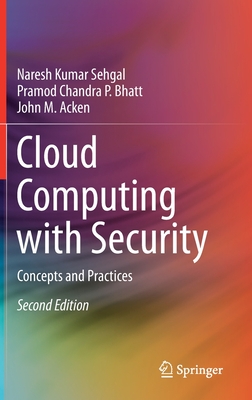 This book provides readers with an overview of Cloud Computing, starting with historical background on mainframe computers and early networking protocols, leading to current concerns such as hardware and systems security, performance, emerging areas of IoT, Edge Computing etc. Readers will benefit from the in-depth discussion of cloud computing usage and the underlying architectures. The authors explain carefully the "why's and how's" of Cloud Computing, so engineers will find this book an invaluable source of information to the topic. This second edition includes new material on Cloud Computing Security, Threat Vectors and Trust Models, as well as best practices for a using dynamic cloud infrastructure, and cloud operations management. Several new examples and analysis of cloud security have been added, including edge computing with IoT devices.

Naresh K. Sehgal has been working at Intel since 1988, prior to that completed his B.E. from Punjab Engineering College, M.S. and Ph.D. from Syracuse University. Naresh has taught a Cloud Computing class at Santa Clara University, where he also earned a MBA.Pramod Chandra (PCP) Bhatt started his teaching career in 1965 at IIT Kanpur, and then moved to IIT Delhi in 1969, and retired from IIT Delhi in 1996. Prof Bhatt also worked as a visiting professor at the University of Ottawa, McGill University, Montreal (Canada), Universities of Dortmund, Paderborn and Bochum (Germany), and Kochi University of Technology (Japan). Prof. Bhatt has a M.E. from Calcutta University and a PhD from IIT Kanpur. He has also been a Konrad Zuse Fellow at the University of Dortmund.John M. Acken is a research faculty member in the Electrical and Computer Engineering Department, Portland State University, Portland, OR. John received his BS and MS in Electrical Engineering from Oklahoma State University and Ph. D. in Electrical Engineering from Stanford University. His projects include technology and devices for information security and identity authentication. John has worked as an Electrical Engineer and Manager at several companies, including the US Army, Sandia National Labs in Albuquerque, New Mexico and Intel in Santa Clara, CA. John's time in the US Army was in the Army Security Agency, a branch of NSA during the Vietnam War.