Autumn Krause & Nikki Barthelmess discuss and sign their latest titles, A Dress for the Wicked & The Quiet You Carry 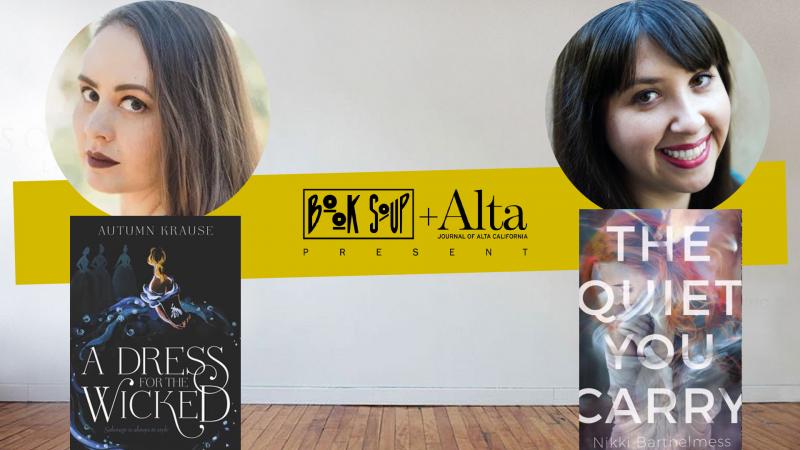 A Dress for the Wicked: True to its name, the sleepy town of Shy in Avon-upon-Kynt is a place where nothing much happens. And for eighteen years, Emmaline Watkins has feared that her future held just that: nothing.  But when the head of the most admired fashion house in the country opens her prestigious design competition to girls from outside the stylish capital city, Emmy's dreams seem closer than they ever have before.  As the first "country girl" to compete, Emmy knows she'll encounter extra hurdles on her way to the top. But as she navigates the twisted world of high fashion, she starts to wonder: Will she be able to tailor herself to fit into this dark, corrupted race? And at what cost? (Harperteen)

The Quiet You Carry: Victoria Parker knew her dad's behavior toward her was a little unusual, but she convinced herself everything was fine--until she found herself locked out of the house at 3:00 a.m., surrounded by flashing police lights. Now, dumped into a crowded, chaotic foster home, Victoria has to tiptoe around her domineering foster mother, get through senior year at a new school, and somehow salvage her college dreams . . . all while keeping her past hidden. But some secrets won't stay buried--especially when unwanted memories make Victoria freeze up at random moments and nightmares disrupt her sleep. Even worse, she can't stop worrying about her stepsister Sarah, left behind with her father. All she wants is to move forward, but how do you focus on the future when the past won't leave you alone? (Flux)

A Dress for the Wicked (Hardcover)

The Quiet You Carry (Paperback)