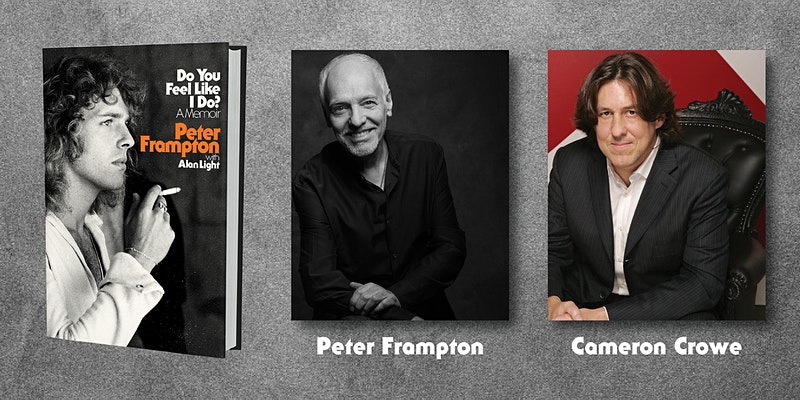 Spend the evening with Peter Frampton and Cameron Crowe as they talk about Frampton’s newly released memoir, Do You Feel Like I Do?

Do You Feel Like I Do? is the incredible story of Peter Frampton's positively resilient life and career told in his own words for the first time. His monu-mental album Frampton Comes Alive! spawned three top-twenty singles and sold eight million copies the year it was released (more than seventeen million to date), and it was inducted into the Grammy Hall of Fame in January 2020.
Frampton was on a path to stardom from an early age, first as the lead singer and guitarist of the Herd and then as cofounder -- along with Steve Marriott -- of one of the first supergroups, Humble Pie. Frampton was part of a tight-knit collective of British '60s musicians with close ties to the Rolling Stones, the Beatles, and the Who. This led to Frampton playing on George Harrison's solo debut, All Things Must Pass, as well as to Ringo Starr and Billy Preston appearing on Frampton's own solo debut. By age twenty-two, Frampton was touring incessantly and finding new sounds with the talk box, which would become his signature guitar effect.
Frampton remembers his enduring friendship with David Bowie. Growing up as schoolmates, crossing paths throughout their careers, and playing together on the Glass Spider Tour, the two developed an unshakable bond. Frampton also shares fascinating stories of his collaborative work with Harry Nilsson, Stevie Wonder, B. B. King, and members of Pearl Jam. He reveals both the blessing and curse of Frampton Comes Alive!, opening up about becoming the cover boy he never wanted to be, his overcoming sub-stance abuse, and how he has continued to play and pour his heart into his music despite an inflammatory muscle disease and his retirement from the road.
Peppered throughout his narrative is the story of his favorite guitar, the Phenix, which he thought he'd lost in a fiery plane crash in 1980. But in 2011, it mysteriously showed up again -- saved from the wreckage. Frampton tells of that unlikely reunion here in full for the first time, and why the miraculous reappearance is emblematic of his life and career as a quintessential artist. (Hachette Books)

Thank you for registering for Book Soup’s Exclusive Virtual Book Launch: Peter Frampton and Cameron Crowe! Your ticket purchase includes Frampton’s book (with a signed bookplate for the first 200 registrants), and specially designed swag (including guitar pick and Frampton event poster). With this ticket purchase, you are entitled to register for a virtual event featuring Peter Frampton and moderated by Cameron Crowe on Crowdcast occurring on October 20 at 4pm PST. You will receive a separate email with the URL for the event, along with a password which you’ll use to register yourself for this virtual event. This separate registration to access the Crowdcast site comes with no additional cost. Look for this email with the event URL and password to arrive 24 hours prior to the event. Peter Frampton's new book, Do You Feel Like I Do?, will be published the day of the event, October 20. We will mail your copy (or copies) of the book to the address you provided at checkout using USPS Priority Mail.

Please note: The shipping amount added to the ticket price is for Priority shipping only. There is an additional $17.00 charge required if shipping internationally.