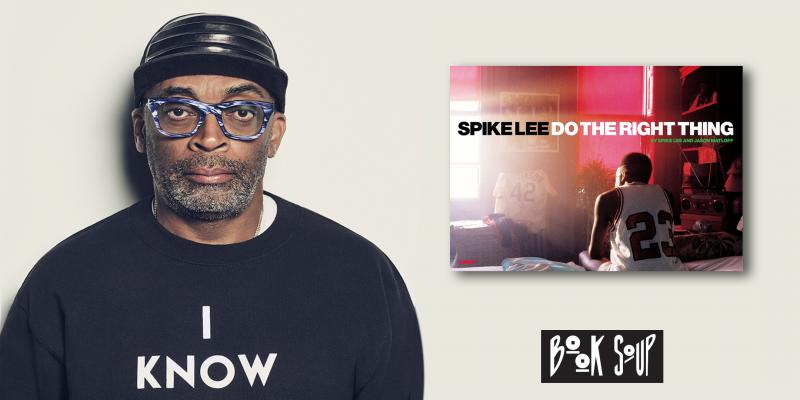 We are so excited to welcome 2019 Oscar nominee Spike Lee, back to Book Soup to sign copies of the book chronicling his seminal film, “Do the Right Thing”.  Tickets are available now on Eventbrite for $25.00 (+tax) and include one copy of Spike Lee: Do the Right Thing.

About Spike Lee: Do the Right Thing

Celebrating 30 years since its seminal debut, "Do The Right Thing" remains one of the most important films of its era. Employing director Spike Lee's hometown of Brooklyn as the essential setting, this explosive film masterfully explores race and class relationships. Both a critical and popular success, "Do The Right Thing" became a landmark film that brought serious issues in the African American community to light and established Lee as a major director in American cinema. Lee also wrote the screenplay, produced, and even starred in this deeply personal film, which was applauded for its commanding visuals provided by Danny Aiello and John Turturro, and an assertive soundtrack featuring Public Enemy's "Fight the Power."

Spike Lee is an American film director, producer, writer, and actor. His production company, 40 Acres and a Mule Filmworks, has produced over 35 films since 1983. Spike Lee is also a three time Oscar nominee this year, garnering nominations for Best Picture, Best Director, and Best Adapted Screenplay for BlacKkKlansman .

BlacKkKlansman is the 2018 American biographical crime comedy-drama film directed by Spike Lee and written by Charlie Wachtel, David Rabinowitz, Kevin Willmott, and Lee, based on the 2014 memoir Black Klansman by Ron Stallworth.

* Tickets ($25.00 + tax) available at Eventbrite, include one copy of Spike Lee: Do the Right Thing and serve as one signing line ticket.

* We will form a line and check people in outside of the store at 10am. Please do not line up before then.

* We will not be accepting online orders for this event. Anyone who purchases a ticket to this event must be in attendance to get their copy signed. If a ticket holder is unable to attend an unsigned copy will be held for pick up after the event.