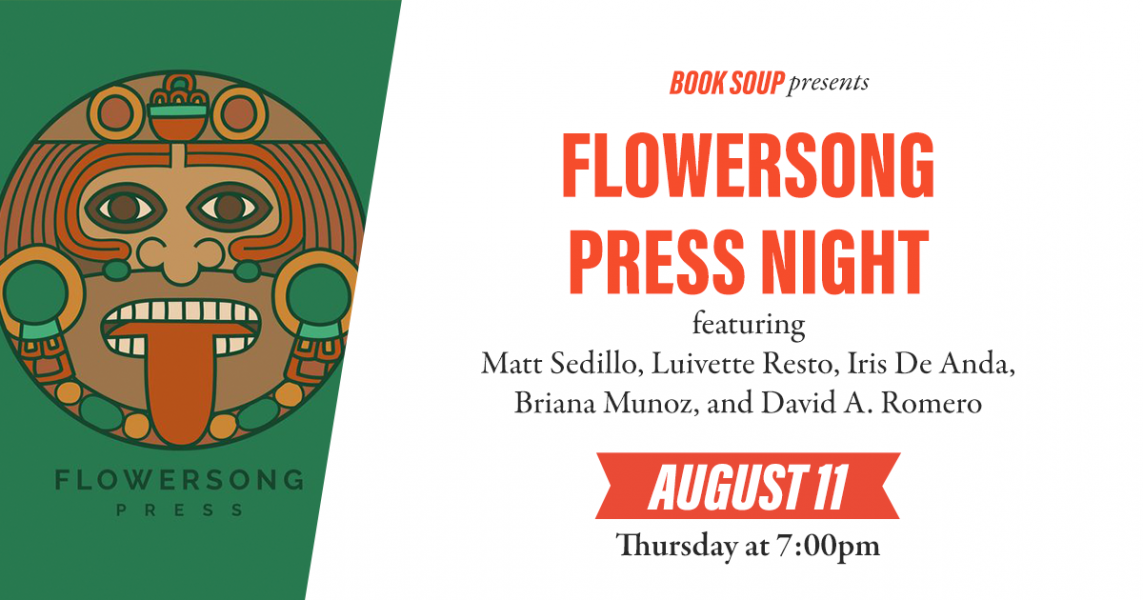 Based in McAllen, TX, FlowerSong Press (www.flowersongpress.com) nurtures essential verse from, about, and through the borderlands. The voices of those from Latin America, the U.S.A. and all over the world. “We are Literary, Lyrical, Boundless, and we welcome allies that understand and join in the voice of people of color and our struggle, truth, and hope.”

Collectively, the FlowerSong Press poets and writers from California have performed their poetry around the world, sold thousands of copies of their books, had their work published in dozens of literary journals and newspapers, performed at hundreds of colleges and universities, have been taught at dozens of colleges and universities and have also engaged in powerful work to uplift and transform their communities.

On this night Book Soup is excited to have them join us as we put a spotlight on five of their writers: Matt Sedillo, Luivette Resto, Iris De Anda, Briana Muñoz, and David A Romero.

Matt Sedillo has been described by journalists and historians alike as, “the best political poet in America” as well as “the poet laureate of the struggle.” His work has drawn comparisons in print to Bertol Brecht, Roque Dalton, Amiri Baraka, Alan Ginsberg and countless other legends of the past. Sedillo was the recipient of the 2017 Joe Hill Labor Poetry Award, a panelist at the 2020 Texas Book Festival, and a participant in the 2011 San Francisco International Poetry Festival, the 2022 Elba Poetry Festival. Sedillo has appeared on CSPAN, been featured in the Los Angeles Times, Axios, the Associated Press, NPR for the Southwest, the Kenyon Review, the Pacifica Network, the Canadian Broadcast Corporation among many other publications and broadcasts. Sedillo has spoken at Casa de las Americas in Havana, Cuba, at numerous conferences and forums, such as the National Conference on Race & Ethnicity in American Higher Education, the National Association of Chicana/Chicano Studies, the Left Forum, the US Social Forum, the Left Coast Forum, the Worker Cooperative National Conference, the Association of Writers and Writing Programs and at over a hundred universities and colleges, including the University of Cambridge. Matt Sedillo is the author of Mowing Leaves of Grass (FlowerSong Press, 2019) and City on the Second Floor (FlowerSong Press, 2022), both of which are taught at universities throughout the country as coursework.

Luivette Resto, a mother, teacher, poet, and Wonder Woman fanatic, was born in Aguas Buenas, Puerto Rico but proudly raised in the Bronx. Her previous two books of poetry, Unfinished Portrait, and Ascension, have been published by Tía Chucha Press. Some of her latest work can be found on the University of Arizona’s Poetry Center website, Bozalta, Spillway, and North American Review. Living on Islands Not Found on Maps (FlowerSong Press, 2022) is her third collection of poetry and first publication with FlowerSong Press. She lives in the San Gabriel Valley with her three children aka her revolutionaries.

Iris De Anda, a Guanaca Tapatia poet, speaker and musician, has been featured with KPFK, KPFA Pacifica Radio, organized with Academy of American Poets, performed at Los Angeles Latino Book Festival, Feria del Libro Tijuana, Casa de las Americas in Havana, Cuba, and is named one of Today's Revolutionary Women of Color. De Anda is author of Codeswitch: Fires from Mi Corazon. Her second poetry book Roots of Redemption: You Have No Right to Remain Silent is available now from FlowerSong Press. Find her on Instagram @lawriterunderground.

Briana Muñoz is a poet from Southern California. She is the author of Loose Lips, a poetry collection published by Prickly Pear Publishing (2019) and of Everything is Returned to the Soil published by FlowerSong Press (2021). Her work has been published in the Bravura Literary Journal, the Dryland Literary Journal, the Oakland Arts Review, in Boundless: The Anthology of the Rio Grande Valley International Poetry Festival, and the anthology, Reimagine America, among others. She is an Indigenous Mexica danzante. She is also the co-creator of Hairy Leg Lingerie, a creative collective birthed to highlight local talent from the non-binary, femme, and trans communities. Briana currently serves as the Volunteer Event Coordinator for the Sims Library of Poetry and was the Volunteer Fundraising Coordinator for the Luis J Rodriguez for CA Governor 2022 campaign.

David A. Romero is a Mexican-American spoken word artist from Diamond Bar, California. Romero is the author of My Name Is Romero (FlowerSong Press, 2020), a book reviewed by Gustavo Arellano (¡Ask a Mexican!), Curtis Marez (University Babylon), and founding member of Ozomatli, Ulises Bella. Romero has appeared at over seventy-five colleges and universities in thirty-three states in the USA. Romero's work has been published in literary magazines in the United States, England, and Canada. Romero has opened for Latin Grammy winning bands Ozomatli and La Santa Cecilia. Romero’s work has been published in anthologies alongside poets laureate, Joy Harjo, Lawrence Ferlinghetti, Luis J. Rodriguez, Jack Hirschman, and Tongo Eisen-Martin. Romero has won the Uptown Slam at the historic Green Mill in Chicago, the birthplace of slam poetry. Romero’s poetry deals with family, identity, social justice issues, and Latinx culture. Romero offers a scholarship for high school seniors interested in spoken word and social justice: “The Romero Scholarship for Excellence in Spoken Word.”

City on the Second Floor (Paperback)

Living on Islands Not Found on Maps (Paperback)

Roots of Redemption: You have no Right to remain Silent (Paperback)

My Name is Romero (Paperback)