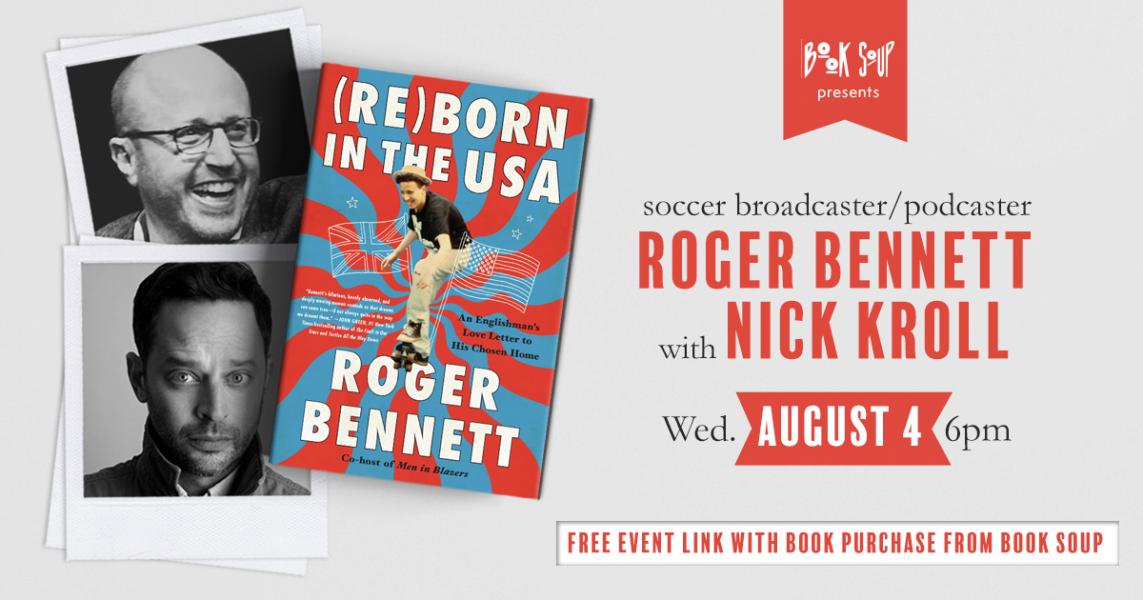 Book Soup presents Roger Bennett, in conversation with Nick Kroll, discussing Reborn in the USA: An Englishman's Love Letter to His Chosen Home

One-half of the celebrated Men in Blazers duo, longtime culture and soccer commentator Roger Bennett traces the origins of his love affair with America, and how he went from a depraved, pimply faced Jewish boy in 1980's Liverpool to become the quintessential Englishman in New York. A memoir for fans of Jon Ronson and Chuck Klosterman, but with Roger Bennett's signature pop culture flair and humor.

Being a teenager isn't easy, no matter where in the world you live or how much it does or doesn't rain in your hometown. As an outsider--a private-schooled Jewish kid in working-class, heavily Catholic Liverpool--Roger Bennett wasn't winning any popu-larity contests. But there was one idea, or ideal, that burned bright in Roger's heart. That was America-- with its sunny skies, beautiful women, and cool kids with flipped collars who ate at McDonald's. When he embraced American popular culture, the dull gray world he lived in turned to neon teal--a color which had not even been invented in England yet. Intro-duced first through the gateway drug of The Love Boat, then to Rolling Stone, the NFL, John Hughes movies, Run-DMC, and Tracy Chapman, Roger embraced everything that would capture the imagination of a teenager growing up Stateside. When he made a real, in-the-flesh American friend who invited him over for the summer, he got to visit the promised land. A month in Chicago, and a life-changing night spent in the company of the Chicago Bears, was the first hit of freedom, of independence, of the Roger Bennett he knew he could be.

(Re)Born in the USA captures the universality of growing pains, growing up, and growing out of where you come from. Drenched in the culture of the late '80s and '90s from the UK and the USA, and the heartfelt, hilarious sense of humor that has made Roger Bennett so beloved by his listeners, here is both a truly unique coming-of-age story and the love letter to America that the country needs right now.

This event ticket includes access to the event + a copy of REBORN IN THE U.S.A. with a signed/numbered custom "Hooray for Hollywood" bookplate (while supplies last)

You will receive a link and password to attend the Crowdcast event on the afternoon of Tuesday, August 3rd.

Books will be mailed to you after the event. For those who choose in-store pick up, you will be contacted by Book Soup via email following the event and alerted as to when your book will be ready for pick up.