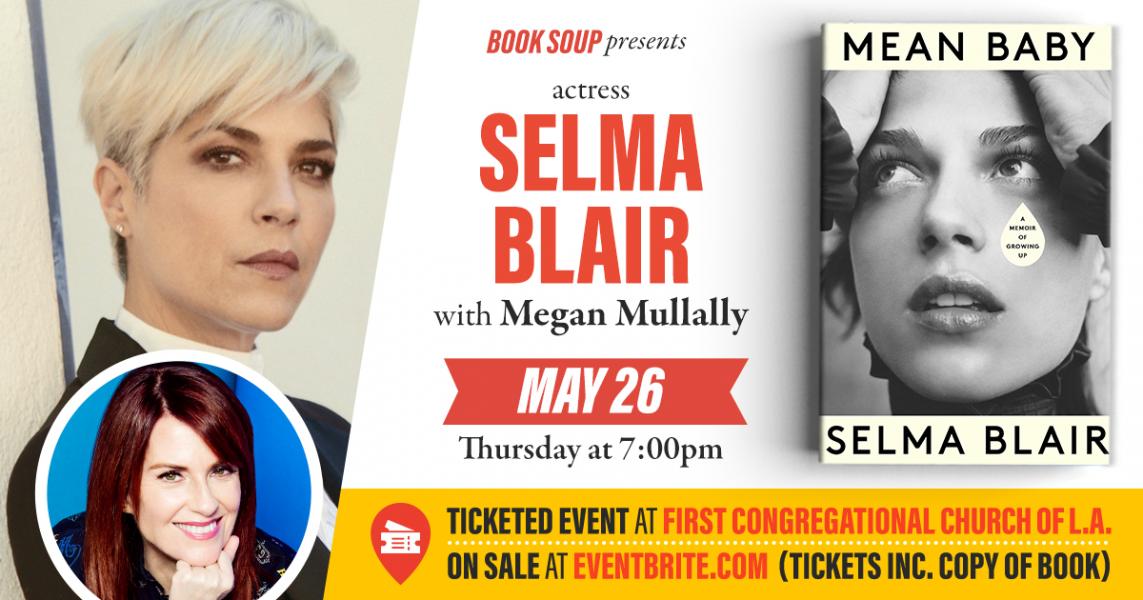 In partnership with First Congregational Church of Los Angeles

Doors open at 6:30pm; Event starts at 7:00pm.
Tickets include one entry and one signed hardcover copy of Mean Baby, to be handed out at check-in.

Selma Blair has played many roles: Ingenue in Cruel Intentions. Preppy ice queen in Legally Blonde. Muse to Karl Lagerfeld. Advocate for the multiple sclerosis community. But before all of that, Selma was known best as ... a mean baby. In a memoir that is as wildly funny as it is emotionally shattering, Blair tells the captivating story of growing up and finding her truth.

The first story Selma Blair Beitner ever heard about herself is that she was a mean, mean baby. With her mouth pulled in a perpetual snarl and a head so furry it had to be rubbed to make way for her forehead, Selma spent years living up to her terrible reputation: biting her sisters, lying spontaneously, getting drunk from Passover wine at the age of seven, and behaving dramatically so that she would be the center of attention.

Although Selma went on to become a celebrated Hollywood actress and model, she could never quite shake the periods of darkness that overtook her, the certainty that there was a great mystery at the heart of her life. She often felt like her arms might be on fire, a sensation not unlike electric shocks, and she secretly drank to escape.

Over the course of this beautiful and, at times, devastating memoir, Selma lays bare her addiction to alcohol, her devotion to her brilliant and complicated mother, and the moments she flirted with death. There is brutal violence, passionate love, true friendship, the gift of motherhood, and, finally, the surprising salvation of a multiple sclerosis diagnosis.

In a voice that is powerfully original, fiercely intelligent, and full of hard-won wisdom, Selma Blair's Mean Baby is a deeply human memoir and a true literary achievement. (Knopf Publishing Group)

“Blair is a rebel, an artist, and it turns out: a writer.” --Glennon Doyle, Author of the #1 New York Times Bestseller Untamed and Founder of Together Rising

Megan Mullally is an award-winning television, film, and theatrical actor, and musician. She is best known for creating the role of Karen Walker on Will & Grace, for which she won two Emmys, four SAG Awards, and four Golden Globe nominations. Past and upcoming projects include Fucking Identical Twins, Party Down, Party Down.0, Parks and Recreation, Bob’s Burgers, and seven seasons of the award-winning comedy Childrens Hospital. Broadway credits include Young Frankenstein, It’s Only a Play, How To Succeed In Business…, and Guys and Dolls opposite Nathan Lane at Carnegie Hall. Her band Nancy And Beth has played to great acclaim in the U.S., the U.K. and Australia. Their second record will be released in 2023.

Please note: Everyone entering First Congregational Church of Los Angeles property must be fully vaccinated (boosters not required) and show proof of vaccination. Masks must be worn while indoors.