SOLD OUT: Book Soup presents Tom Felton, in conversation with Ben Lyons, discussing Beyond the Wand: The Magic & Mayhem of Growing Up a Wizard 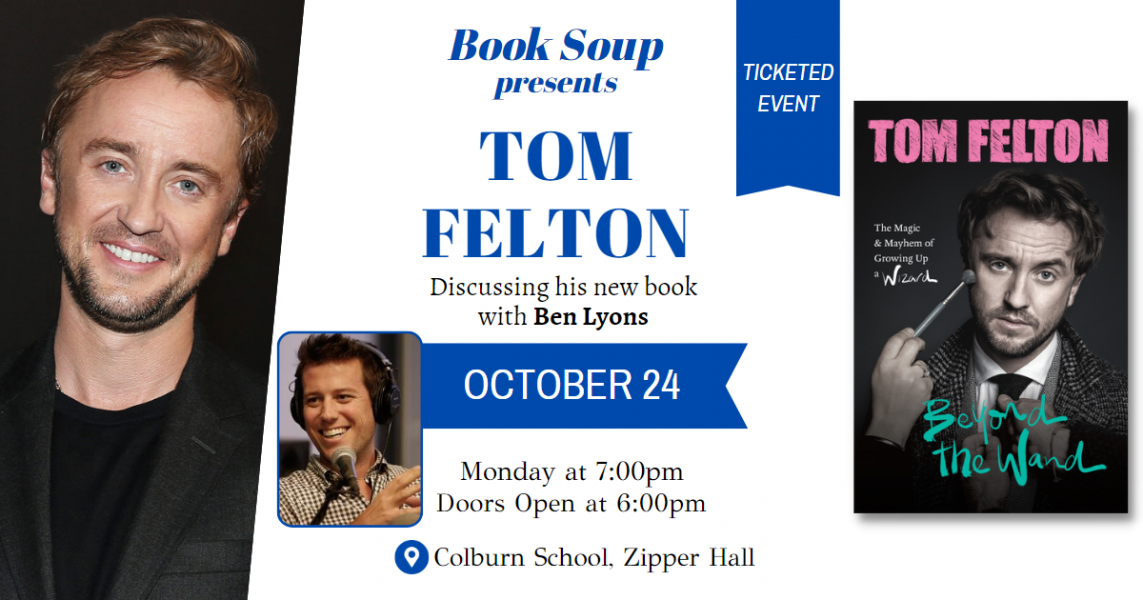 Please note: Masks are required for all audience members attending events on the Colburn campus.

From the magical moments on set as Draco Malfoy to the challenges of growing up in the spotlight, get a backstage pass into Tom Felton's life on and off the big screen.

Tom Felton's adolescence was anything but ordinary. His early rise to fame in beloved films like The Borrowers catapulted him into the limelight, but nothing could prepare him for what was to come after he landed the iconic role of the Draco Malfoy, the bleached blonde villain of the Harry Potter movies. For the next ten years, he was at the center of a huge pop culture phenomenon and yet, in between filming, he would go back to being a normal teenager trying to fit into a normal school.

Speaking with great candor and his signature humor, Tom shares his experience growing up as part of the wizarding world while also trying to navigate the muggle world. He tells stories from his early days in the business like this first acting gig where he was mistaken for fellow block child actor Macauley Culkin and his Harry Potter audition where, in a very Draco-like move, he fudged how well he knew the books the series was based on (not at all). He reflects on his experiences working with cinematic greats such as Alan Rickman, Sir Michael Gambon, Dame Maggie Smith, and Ralph Fiennes (including that awkward Voldemort hug). And, perhaps most poignantly, he discusses the lasting relationships he made over that decade of filming, including with Emma Watson, who started out as a pesky nine-year-old who he mocked for not knowing what a boom mic was but who soon grew into one of his dearest friends. Then, of course, there are the highs and lows of fame and navigating life after such a momentous and  life-changing experience.

Tom Felton's Beyond the Wand is an entertaining, funny, and poignant must-read for any Harry Potter fan. Prepare to meet a real-life wizard. (Grand Central Publishing)

Event location: Colburn School, Zipper Hall located at 200 S. Grand Ave. Los Angeles, 90012.
Tickets include one entry and one signed hardcover copy of Beyond the Wand, to be handed out at check-in.

Questions? Please email us at info@booksoup.com

THIS EVENT IS SOLD OUT.