VIRTUAL: Chelsea Martin and Emma Bolden present their latest releases, Tell Me I’m An Artist and The Tiger and the Cage 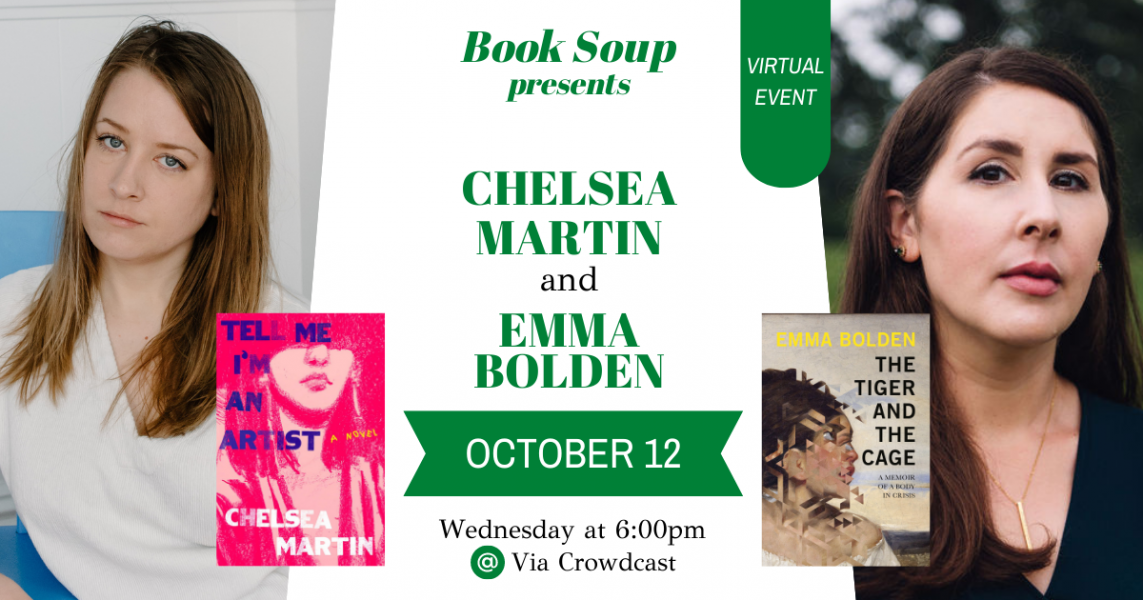 At her San Francisco art school, Joey enrolls in a film elective that requires her to complete what seems like a straightforward assignment: create a self-portrait. Joey inexplicably decides to remake Wes Anderson's Rushmore despite having never seen the movie. As Tell Me I'm An Artist unfolds over the course of the semester, the assignment hangs over her as she struggles to exist in a well-heeled world that is hugely different from any she has known.

Miles away, Joey's sister goes missing, leaving her toddler with their mother, who in turn suggests that Joey might be the selfish one for pursuing her dreams. Meanwhile, her only friend at school, the enigmatic Suz, makes meaningful, appealing art, a product of Suz's own singular drive and talent as well as decades of careful nurturing by wealthy, sophisticated parents.

A masterful novel from an author known for her candid and searching prose, Tell Me I'm An Artist examines the invisible divide created by class and privilege, ruminates on the shame that follows choosing a path that has not been laid out for you, and interrogates what makes someone an artist at all. (Soft Skull)

In Catholic grade school, Emma Bolden has a strange experience with a teacher that unleashes a short-lived, persistent coughing spell--something the medical establishment will later use against her as she struggles through chronic pain and fainting spells that coincide with her menstrual cycle.

With The Tiger and the Cage, Bolden uses her own experience as the starting point for a journey through the institutional misogyny of Western medicine--from a history of labeling women "hysterical" and parading them as curiosities to a lack of information on causes or cures for endometriosis, despite more than a century of documented cases. Recounting botched surgeries and dire side effects from pharmaceuticals affecting her and countless others, Bolden speaks to the ways people are often failed by the official narratives of institutions meant to protect them.

Bolden also interrogates a narrative commonly imposed on menstruating bodies: the expected story arc of marriage and children. She interrogates her body as a painful site she must mentally escape and a countdown she hopes to beat by having a child before a hysterectomy. Only later does she find language and acceptance for her asexality and the life she needs to lead. Through all its gripping, devastating, and beautiful threads, The Tiger and the Cage says what Bolden and so many like her have needed to hear: I see you, and I believe you. (Soft Skull)

Tell Me I'm An Artist (Hardcover)

The Tiger and the Cage: A Memoir of a Body in Crisis (Paperback)