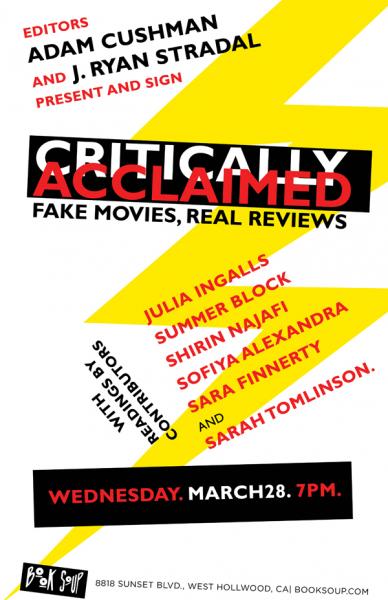 "A large portion of this money, we of course have now learned, was put toward the scientific enterprise of discovering a new planet in the solar system and then, no other way to describe it, blowing it up."

A fun and poignant collection of real reviews of fake movies by some of today's best and brightest writers.  What seems like a funny, whimsical book, is actually an acute look at how cultural criticism works, what we find important or unimportant, and how movies help shape our world. (Rare Bird Books, a Vireo Book)

Shirin Najafi is a writer and actress living in Los Angeles. She has written for the CBS Diversity Showcase and Threads on NewForm. She most recently co-created and co-starred in the web series "Mental." She has performed standup at The Comedy Store and Hollywood Improv. She can be found on Twitter and Instagram @shirincnajafi

Sara Finnerty has essays and stories in Lithub, Black Warrior Review, Brevity, Longreads, Joyland, The Nervous Breakdown, Fanzine, The Weeklings, Dame, and others. She is the Nonfiction Editor at Entropy magazine, co-curator of The Griffith Park Storytelling Series and The Women’s Center for Creative Work Reading Series. Sara is originally from Queens, NY and lives in Los Angeles with her husband and daughter. Find her at www.sarafinnerty.com.

Sofiya Alexandra is a writer and comedian who grew up in Odessa, Ukraine, and moved to Los Angeles at the age of 11. You might have seen her on Comedy Central’s This Is Not Happening talking about her grandpa’s dick surgery while using some colorful Russian. Currently Sofiya’s a writer on Amazon’s Danger & Eggs, which was nominated for a Critic’s Choice Award for Best Animated Series. She’s been featured as a standup at Limestone, Laughing Skull, Women in Comedy, 208, Bird City, Hell Yes, Out of Bounds, Laugh Your Asheville Off, and Cinder Block Comedy Festivals. Sofiya was named one of The Fifty Funniest Women on Twitter by Playboy and one of 18 Funny Women You Should Be Following by Huffington Post. Her tweets regularly appear on Mandatory, Buzzfeed, Splitsider, Funny or Die, and HuffPo. She also produces a hit mystery-lineup variety show called SURPRISE!, which has been featured in LAist, LA Weekly, The Los Angeles Review of Books, OneThingLA, and WeLikeLA. She also beat breast cancer but if cancer is listening THIS IS NOT A CHALLENGE.

As a literary fiction writer, Ana Velouise focuses on themes of women’s self-determination and resilience, with the intention of stimulating visions for a better world among the imaginations of women and girls. Her stories have appeared in award-winning literary publications including The Rumpus and Eclectica Magazine and she has served as the fiction editor of the literary culture site The Nervous Breakdown. When she’s not submerged in a good book, she can be found wrangling her two cats or hiking the trails around Los Angeles, where she lives with her family. Ana has a fondness for the Oxford comma and people who come to literary readings to support their friends.

Sarah Tomlinson is the author of the father-daughter memoir, GOOD GIRL. She has ghostwritten or co-written 16 books, including the New York Times Bestseller, FAST GIRL, with Suzy Favor Hamilton, and four un-credited NYT bestsellers. Her music criticism, articles, and personal essays have appeared in publications including Marie Claire, MORE, Publishers Weekly, Salon.com, and The Los Angeles Times. Her fiction has appeared in Vol. 1 Brooklyn. Her favorite band is T. Rex.

Summer Block has contributed to The Toast, The Awl, McSweeney's, The Rumpus, PANK, and The Nervous Breakdown, among many other places. Her work has been included in several anthologies, most recently in California Prose Directory.

Sarah LaBrie's fiction has appeared or is forthcoming in Guernica, Lucky Peach, The Literary Review, Epoch, Taste, Joyland and Encyclopedia Journal. Her work for the Industry Opera’s Hopscotch was featured in the New Yorker, Wired and on NPR. dreams of the new world, a choral piece commissioned by the Los Angeles Master Chorale and developed with composer Ellen Reid will premiere at Walt Disney Concert Hall in May 2018.